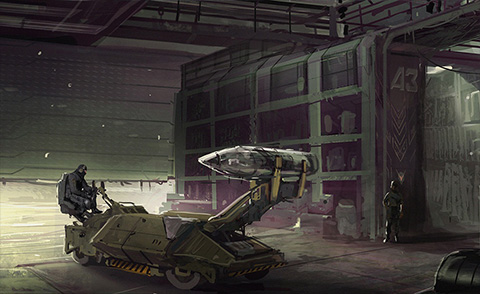 It’s been 6 days since the leadership of Fort Campbell and its inhabitants was thrust upon me. To be honest, I had never really considered having my own command. My intention was to put in five more years before retiring and entering civilian life. The strain has been too much on me. Chloe, not being able to see you or your Mother has been the hardest battle that I’ve ever been involved in, but this is definitely a close second.

I spent the first few days trying to get up to date on all of our intelligence reports. Things are much more complicated than I first thought. I knew we had been hit and that it was bad, but I hadn’t understood the real changes taking place and the complete lack of infrastructure. The government had tried to destroy or redirect the asteroid with Project Vanguard, a multi-platform orbital defense system.

There wasn’t enough time for them to figure out exactly what had gone wrong, but I do know that all but one of the platforms did not respond to the activation command routine. The one that did fire was so far off that it ended up taking out the National Defense Communication Array, the main source for military communications and intelligence monitoring. The platforms were designed to deliver polarized photonic gauss rounds that would create an electromagnetic wave upon impact, this was meant to divert anything that wasn’t destroyed with as little collateral damage as possible.

Unfortunately, due to unknown circumstances the NDCA amplified effect causing a planetary pulse wave that knocked out all major communications and power sources. With the failure of Project Vanguard, the contingency plan was activated. All government officials, their families, and anyone else of major importance or skill was quietly whisked away to hidden blacksite bunkers. The only organizations attempting to do anything were local emergency personnel, FEMA, and what was left of the military structure.

With little to no communication it was almost impossible to coordinate correctly. Once the General had evacuated Fort Campbell of non-essential personnel, he initiated a standard search and rescue pattern, slowly expanding from our base of operation. All troops were assigned low band frequency radios for communication, and all resources were allocated to helping the civilian population.

The one thing he didn’t foresee was the growth and its rapid infection. As fast as they were covering ground, it was outpacing them. The group that I found were stragglers of a patrol that had been ordered to return to base. The last of the search parties. It was pure luck that we ran into each other, almost literally.

I’ve re-routed techs to get our power system up and running properly, then I’m going to get them to work on the communications array. The engineering corps are working on increasing our perimeter defenses. I’m also moving the civilian population into the family housing complex and officer housing areas. All military personnel are now in the barracks, well, except for myself; I’ve put a cot in my office and have been living out of it since.

We need to create some sense of stability and I think getting our main generator online is the first step, the backup was never meant to last this long as a primary source. Once that’s taken care of we can start assessing the damage and coming up with a plan.

Our food supply is pretty good, and once the generator is green; we can start purifying the water and air supply. So that’s something at least.

My biggest problem is that I don’t know what’s out there. I’ve seen the infected, and I’ve seen these “marauders” as some of the staff are calling them, but who knows what the hell else is out there now. It’s been weeks since this stuff got into the atmosphere.

We’ve been breathing it in the whole time. That’s another reason I moved the people inside, I can filter the air in there, because eventually the piss is going to start flowing this way and the last thing I need is a bunch of dead bodies fertilizing the ground, or worse; bat-shit crazy people trying to kill each other. But this is my job now, my life even.

I know this is going to sound silly, but the weirdest part about all this is when they call me “Colonel”, I’m so not used to it that I walked completely past a group of Marines today as they stopped to salute me. I had to run back, apologize, and salute. Maybe I’m just getting old, or maybe that crap is making me forget too. Oh God, I hope not.

When I looked in the mirror this morning, I barely recognized myself. My hair has grown out more than my usual tight crop, and I’m hosting a fresh beard. But the uniform just doesn’t seem right. I just keep staring at the eagle on my rank insignia, for something so small and insignificant, it weighs so much…

Things are getting hectic around here now, once the system is back up and running I’m going to try and reach you, but until then; take care of your Mom.