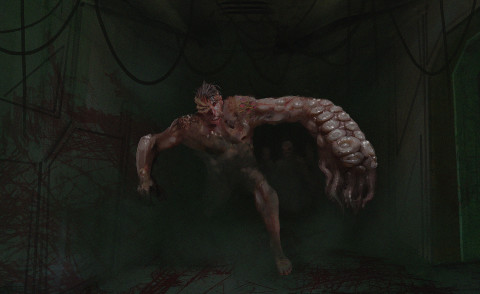 The silence has been enough to drive you crazy. With the facility locked down, there has been no sign of the previous research team that had called this place home. It wasn’t until last night that I started to put the pieces together. We’ve been approaching this completely wrong. We’ve been trying to figure out why the researchers had been conducting these experiments, when we should have been focusing on the bigger picture. The researchers were part of the experiment, just as we are now.

As I roamed the empty halls, I started to get a suspicious feeling in my gut, as if someone was watching me. I couldn’t quite explain it at the time, and I couldn’t justify it, but my instincts told me that we weren’t alone and probably never had been. As I moved cautiously back to the habitat area, I caught a slight movement in the corner of my eye. The surveillance camera rotated slightly on its axis.

Normally I wouldn’t have seen it, but this section of the building was running on low light settings to conserve power so there was no reflection on the roof panel. It all suddenly made sense, this was as much a social experiment as it was a scientific one. As the researchers were studying the poor people locked in the tubes, someone was studying the researchers. And I intended to find out who.

The plan was simple, play the game, call the bluff. I returned to the rest of my team and loudly exclaimed the plan. I ordered them to wipe the systems, overload the core, and plant what remaining charges we had to decimate this facility. Kill the pod people, drop the building. Simple. As the team headed out to complete their mission, I made my way back to the control center, sealed the door, and sat down. Within minutes the monitors sparked to life and a voice echoed out of the intercom system.

“Colonel, I advise you against your current plan of action. It does no one any good to destroy this facility.”

I sat there silently, ignoring the voice.

“Colonel, I implore you, do not undo what has been done here. Facilities like this will be the salvation of humanity.”

The salvation of humanity?!? Torturing innocent people was salvation? As my anger exploded outward, I informed my voyeur of my opinions regarding this “salvation”.

“I understand your apprehension, but we’ve lost this planet, it’s turned against us. If we don’t find away to adapt to this new environment, to overcome its infection, we are doomed. The information and experiments contained within this facility are key components of a much larger initiative. I know you think your government has abandoned you, but I assure you that it is just gathering information and planning the next steps thoroughly.”

I had to disagree with this plan of action, and suddenly my bluff now was a reality, I was going to drop this building, and hopefully it lands on his head. As I stormed out of the control room, I contacted my team to verify that everything was in place. Before they could respond I heard the sound of doors opening around the facility, and the automated response system kicked in alerting us that the decontamination procedure was inactive. This didn’t make sense until I realized that the suspension chambers were opening and its inhabitants were slowly waking up.

As I ran to the planned meeting location I yelled out a warning over the comm. Ramirez had my gear waiting for me when I arrived. The screeches, screams, and inhuman sounds began to emanate from deeper within the facility. Not everyone in those pods were combatants, they were more than likely being murdered by the ones that were.

We made our way to the exit which unsurprisingly was sealed. As the technicians began the process of trying to unseal it, Ramirez and I moved into position behind the barricades we had setup for the returning research team. The first “person” moved into our sightlines, it was a behemoth of a creature. Its humanity painfully stripped. Its face and body disfigured, cybernetic devices surgically attached to it as it slowly lumbered down the hallway. Its right eye vaguely resembling its once human look, while its left eye was a mass of fatty flesh and what appeared to be fungal like growths.

As it lumbered forward its heavy breathing and sputtering indicated how difficult simple movement was. Before it could move into range, a group of spore ravaged subjects bolted around it, before we could open fire the larger creature began smashing them into the wall with what could only be described as an engorged and disfigured appendage that substituted as an arm. Part vine, part bone, part metal? I wasn’t really sure, but it was effective.

Crushing the smaller combatants into the plasti-steel wall. We immediately opened fire, killed the first two ferals. The rest turned on the larger creature. As the battle raged we plumed round after round of plasma into the hallway. We continued for what felt like hours, but was really minutes. As the battle subsided we started to see other larger figures emerging from the hallway. It was now or never, I pulled out the remote detonator and said a little prayer. As if some sort of divine being had heard me, Connors yelled that they had bypassed the door. No one waited, I pressed the trigger as we ran.

Behind us the building lit up like a firework display. We dove for cover behind the exterior barricades as debris flew around us, as the building toppled to ground we threw what remaining grenades we had into the flaming ruins. Ramirez jumped to his feet and started running, I wasn’t as fast until he yelled back. The sneaky son of a bitch had set the core reactor to overload, this display wasn’t over. My team began running through the overgrowth, we opened fire with our plasma rifles ahead of us, searing our way through. The growth around us catching fire at an alarming rate.

As if fate had favored us this day, the earth shaking explosion occurred shortly after we broke out of the growth and to the vehicle. We watched as a giant and blinding fireball floated into the heavens…which then caught the air around it on fire…we really hadn’t thought this out. As the firestorm headed towards us, we dove into the troop compartment of the truck. As we huddled for cover the truck lurching back and forth as the pressure from the fire wind hit it.

Once it was all over we made our way slowly back to base. None of us have spoken about what we saw at the CDC. I’ve chosen to wait a few days before debriefing. There are things I need to consider, new factions in play.