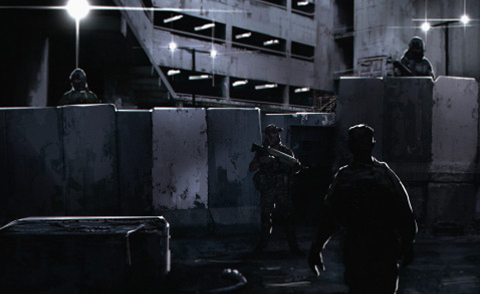 We’ve spent the rest of the trip to Fort Campbell in relative silence. The field of bodies had taken its toll on everyone in the group. I keep seeing the corpses of men, women, and children curled into unnatural positions with inhuman looking visages on their faces. Their bodies covered in cuts, sores, blisters, and strange growths.

It wasn’t the bodies themselves that were so unnerving, but the twisted reminiscence of humanity that they displayed. It reminded me of the early days of my military career. We had been sent into a facility in South America that was being used as a laboratory for illegal gene therapy programs. A local criminal organization had managed to purchase old US military data that had been deemed “morally inexcusable” by world powers. This specific data entailed a defunct “super soldier” program.

Needless to say, it wasn’t successful and the plight of the volunteers could rival the most shocking of horror movies. Unfortunately, the criminal entities responsible thought they could do better. The result was a group of extremely violent and insane people. I will never forget the looks on their faces or the lack of humanity in their eyes. The pure hate and anger displayed. It was as if someone had glued human skin onto a monster, and then prodded that monster with a very sharp stick.

Our mission was simple in that circumstance: destroy the research and the program. But the people from the city… they hadn’t chosen this. It had been thrust on them, and that was the saddest part.

We saw Fort Campbell as we rounded the edge of the tree line. It was lit up like a giant beacon of hope, and it was glorious. The perimeter had been reinforced with additional fencing and barricades. There were multiple checkpoints to access the main base area, and people were milling about all over the place. In the large field and parking area was a mass of tents with what appeared to be refugees going about their daily tasks.

As we approached the main checkpoint, I noticed the large amount of weapons pointed in our direction. Alvarez yelled out and the weapons eased. A large Hispanic male came out from behind the barricades and greeted us. We were quickly ushered into the main area. Our group was taken immediately to a quarantine area where we were inspected and decontaminated. We spent about a day in quarantine before the same soldier came to get us. The women that I had brought with me were taken to the civilian area, while the rest of us were sent to a debriefing.

Chloe, I’m not going to bore you with the details of the debriefing, but I relayed the events since my rapid exit of the aircraft.

I did manage to learn some more details about what was going on around us. Approximately 24 hours before the asteroid impacts, all unnecessary base personnel were boarded onto transports and sent west. What remained were front line personnel.

Fort Campbell was now under the command of General Willard T. Ford, a man I was very familiar with. I had struck up a friendship with Willy in my younger days as a cadet, at the time he was running the Officers Academy. He was a large muscular man, with dark skin and bright green eyes. The other cadets called him the “The Panther.” But beneath the imposing looks was a very intelligent and kind man. He spent his free time mentoring and getting to know the student body. He shared stories and advice, and over the years had earned all of our respect.

I asked where the General was, but the response wasn’t what I was expecting.

During the evacuation of the surrounding cities and towns, General Ford had insisted on being present on the ground. He was out there in the chaos helping people. At some point an asteroid fragment struck the vehicle he was a passenger in and killed the crew.

He survived and managed to crawl out. As he did, he saw a small child in the street crying for his mother. The General removed his breather mask and placed it on the child. He grabbed the child and ran to the closest patrol.

The child survived, but Willy began to show signs of some sort of infection. As the days went on and other personnel began to show similar symptoms – some passing away, some becoming like the ones that had chased us only days earlier – he ordered the base into lockdown and quarantined anyone entering the base or showing symptoms of illness. Against all odds he had managed to hold out and was now lying in a quarantine room too sick to leave.

Once the debriefing had completed, I was then escorted to the quarantine section to see my old friend.

The man lying on the bed barely resembled the iron giant that I had known before. His features and physique was wasting away, his eyes sunken, and face covered in sores. His arms were blistered and raw. I approached the viewing window and pressed the communication button.

Our conversation was warm. We were glad to see one another again. He told me that he had made sure that my family was on the first transport out, and that he had received confirmation that the aircraft had landed safely before we lost the satellites. He told me that the government and highest levels of the military hierarchy had abandoned us to save their own “cowardly asses,” and that we had a duty to protect the people, regardless of what happens.

As I stood there listening to a great man speak even greater words, a logistics clerk handed me a data reader. As I looked down, I saw the details of the information. It was a brevet promotion. I held the data reader up so that Willy could see it. He nodded and went on to explain that besides him, I was the highest ranking officer on the base. The rest were either out west, AWOL, or dead, and that someone needed to be in-charge.

As I signed the paperwork, Willy went into a coughing fit. As he wiped the blood from his mouth his eyes met mine, his mouth slowly forming words: “Do me proud, Colonel.”

It’s been approximately 6 hours since we lost General Willard T. Ford. A man with shoes so large that I feel I’m going to get lost in them. Since then it’s been a barrage of information as the staff here are trying to get me up to date on the essentials. This probably means that it’s going to be a while longer before I get to see you again, but I need you to understand that I can’t just leave these people.

I have to help establish some form of structure and safety before I can start making my way out to you. If I didn’t, I wouldn’t be able to look you in the eyes. These last few weeks have been something out of a nightmare, and I finally realized that if it felt this way to me, then what must it feel like to those that don’t have my training, conditioning, or background? I have to do something about that, I won’t abandon like everyone else has. I will write when things aren’t so crazy, goodnight my sweetest angel.