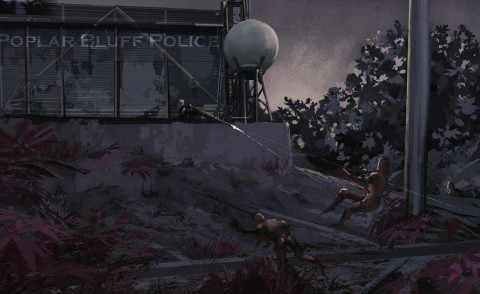 We’ve been holed up in the Poplar Bluff Police Department for several hours now. The “ferals” outside haven’t given up, they have been coming in from different areas of the town, prodding our defenses. Occasionally one will run close to the perimeter and the bots will shoot them down, but as a whole they have kept just outside of our firing range.

A positive to this is that we’ve had the time to get the departments uplink working allowing us to set the system as a slave unit, expanding our broadcasting range and bringing our ocular systems online. It’s also allowed the automated units to link with the main core back at the base instead of using the daisy chain system designed for the small squads.

It hasn’t really made our predicament better, but it has given me an idea. We just need to find a large secure building, leave the bots there to secure the area, and return to the base. We can then bring the convoy to a pre-secured location while we plan the next section of our journey.

I’ve been toying with how we were going to do this in my head, but if we can move from town to town, wiring up the comm systems where we can to extend our communications range, we should be to scout ahead, secure a “safe zone” then radio the convoy to move to the zone. Repeating the process until we reach our destination. This way we won’t be death marching a civilian population, and every night we should have a secure location to rest before moving on.

With a bit of luck we’ll come across some additional equipment and vehicles to assist with the journey. The plan is going to take longer than a mad rush across the country, but slow and smart is the only thing that is going to keep these people alive.

We’ve been monitoring the groups outside, we’ve probably had a few chances to make a run for it, but I’d rather take my time, I’m interested in their new behaviour. I think if we’re going to make the trip and survive we need to start understanding everything that is out here. It just keeps changing so damn fast.

These ones aren’t starving and dying like the others, there is some sort of pack mentality going on. I’ve been tapping my ocular unit into the bots on the roof to monitor our aggressors. There are patterns in their behaviour, there also appears to be some form of rudimentary hierarchy.

My plan is to exit the building when night falls, they don’t appears to have any better night vision than the average human, so my plan is to fire some flares into the groups and retreat into the lower levels of the building. There are some utility tunnels running below that from the plans we brought up lead to a storm drain approximately 500 yards south of the building. From there we’re going to make a straight run to the outskirts of town and follow the mag-rail tracks south out of town and into the town of Neelyville.

Pre-impact maps show that there is a secure school building large enough to house our group. Once that is locked down, we start heading west, scouting out the local towns and communities for our “safe zones”. The goal is to preserve as much ammunition and supplies as possible.

Daylight is starting to disappears so I guess it’s time to get ready to roll out. If all goes to plan, I’ll have something more positive to write about next time.