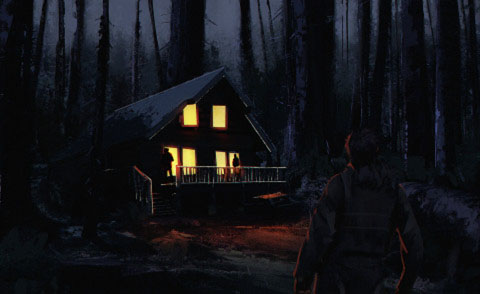 The last few days have been interesting to say the least. I headed into a heavily forested area and everything seemed to be normal. I managed to save some of my canned supplies by substituting local game. It was actually pretty peaceful, it gave me a chance to rest up, gather some supplies such as clean water, before moving on.

I came upon a house last night; it was in a relatively isolated area, tucked well back into the forest. It caught my attention because the interior was fully lit up. I moved up to the edge of the tree line to get a better look, that’s when I heard the first scream, followed by a second, this one much closer. It was emphasized by a male voice yelling profanities. I moved back into the woods a little, into more cover.

That’s when I saw the girl running into the tree line; she would pass right by me. She was close enough that I could see the cuts and bruises all over her dark skin. Her clothing was torn up and bloody. As she drew closer, I saw a large man in military fatigues chasing after her; he kept yelling threats of what he was going to do to her when he caught her.

I didn’t really know what to do, so I did what came naturally. As soon as the girl passed, I quickly shifted from the tree I was behind. As the man passed, I hooked his ankles. As he fell I noticed that his uniform wasn’t right. The patches were not in the right places, or positioned correctly. He wasn’t a soldier; he was someone parading as one.

As he rose to his feet I moved in quickly, I remember the look of shock in his eyes as I drove my knuckles into his throat, crushing his wind-pipe. He stared at me choking, unable to call out for help. In the same motion, I grasped his head over my shoulder and quickly dropped to one knee. I heard the crack and pop, the body kicked for a few seconds then went limp.

The girl was over by the tree in front of us sobbing and shaking. I slowly made my way over, holding my hands up, trying to assure her that I wasn’t going to hurt her. She kept staring at my fatigues. I explained that I wasn’t one of them and that she didn’t have to worry. She calmed down a little when I offered her some water and covered her with my jacket.

Dragging the body, I fell back further from the tree line with the girl in tow. As I searched the imposter, I kept talking to the girl; finally she relaxed enough to let me know what had happened.

Her family had bought this property several years back as a vacation home; her father was a successful real estate agent and wanted somewhere they could all get away. They had decided to come up here for safety, to get out of the city and hide out until things settled down.

In the early hours of the morning a group of soldiers showed up in a large truck. They claimed that they were evacuating people and demanded to search the house. When her father challenged them, they broke through the door and beat him until he was unconscious.

They dragged him outside and tied him to a fence post where they took turns using him as a human target. His wife and two daughters were forced to watch. Since then they had been loading anything worth taking into a truck and getting their enjoyment out of the women. Even in her state of shock she had counted them, five. There were still four combatants in that house.

As a husband and a father something snapped inside me. It was like I became a passenger along for the ride. I gave the girl the handgun I had found on the dead monster and told her to shoot anything that wasn’t me. I then crept back up to the tree line.

As I surveyed the area, I could see two men outside on the porch, same fatigues, both armed with civilian assault rifles. Neither of them carried anything of military grade. I slipped forward behind a large pile of chopped wood; I could see what was left of a body strapped to a fence post. It was riddled with so many bullet holes; you could barely tell it was human.

I could hear one of the two men coming my way; he was yelling to the other that he was going to take a piss. As he got closer, I grasped the axe that sat on the stump beside the pile. I saw his foot step past the pile, as he made his next step I hooked the bottom of the axe blade on his outside shin and pulled, he fell face first into the dirt, as he attempted to rise I drove the blade of the axe into the back of his neck, severing his spinal cord and brainstem.

The other man heard the noise and stepped off the porch to see what had happened; as he got closer I yanked the axe out, stood up, and used the momentum to hurl the axe through the air, catching him at the bottom of his throat, splitting his collarbone in two. Before the body could hit the ground, I was past him and onto the porch.

The house was brightly lit; there was another male sitting on the couch eating from a can. And I could hear crying and scuffling coming from upstairs. I slowly stepped into the house, the thick rug carefully concealing my weight on the wooden floor. I slowly drew my knife from my boot and slipped forward.

As I got to the doorway, I progressed into a short but quick charge, I dove over the arm of the couch, tackling the man to the ground, his can of peaches spilling everywhere. I had the element of surprise and quickly rolled on top of him, my hand pressed on his mouth, quickly I drove the blade of my knife into the side of his neck, severing the artery. He slowly stopped fighting and lay still. I climbed off and made my way up the stairs.

As I hit the third step, it let out a loud creak. The noise coming from upstairs hid the sound. I made my way down the hallway; the open door to my left was obviously the bedroom of a teenage girl, probably the one waiting in the woods. The one on the right was bright pink and full of dolls and stuffed toys, I could see a young girl sobbing on a soiled bed; she wasn’t much older than my own daughter.

As I made my way to the end of the hallway, the sounds got louder. The door was slightly ajar and I could see a large man with scraggly features stood naked over a  dark skinned woman. He was hitting her with his belt while yelling a mixture of racial slurs. Even in this day and age racism still existed; it was something I could never understand.

I stood up, kicked open the door, drew my side arm and let out two rounds. Both rounds hit the man in the crotch and he fall to his knees screaming. I slowly walked closer, putting my sidearm back in its holster, I looked the man directly in the eyes. As the tears streamed down his face and the begging began, I slowly slit his throat.

I gathered the women, gave them what medical attention I could. We gathered any supplies that were left and loaded them into the truck. While they watched, I cut down the body of their father, wrapped it in bed sheets, and buried it. There were no words for this funeral, just the sounds of sobbing from the onlookers.

I’ve decided to take them with me. Maybe we will come across somewhere safe that they could make a new home. I’m not sure, but I swore to them that I would protect them, and if I have to leave a trail of bodies behind me to do it, I swear on anything in the sky that is Holy, that’s what’s going to happen.

The worst part about this is that I have a feeling this isn’t the last time I’m going to walk into evil like this. I just want to kiss my wife and hug my daughter, but I can’t ignore what’s going on around me, how would I be able to look them in the eyes knowing that I’d let so much bad happen when I had the ability to stop it. If we let go of our humanity now when it’s needed the most, we may as well sit back and let the damned weed take everything.