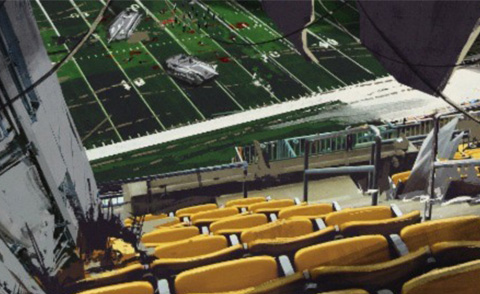 This morning we hit the University campus, it was relatively unscathed, and there were definite signs that people had been living here. The city around it had fallen to the growth, there were signs of fire and impact zones. Most of the city was scorched, from the scorch areas it appeared that the spores had caused a firestorm, similar to what I had seen previously on my travels.

As we approached the University, we scouted the perimeter just to ensure we weren’t going to get any surprises. As we moved into the main commons area we started to hear yelling, and then the sound of gun shots, 5 single shots in succession.

We double timed it in the direction of the sounds, as we came out from behind the library we quickly realized that the sounds were emanating from the football stadium. We cautiously made are way through the parking lot, using the abandoned cars as cover. As we came closer we saw very little in the way of resistance.

The entrance to the stadium was wide open, the gates pulled down. With a quick nod; Jackson, Oulette, and Phillips went high, scaling the overhead lighting poles. We slowly made our way into the gate, moving through the ground facility to the seating area. As we did the shouting became louder, I could feel the tension building.

“Rodeo Red 3 in position, and you’re going to want to see this Rodeo 6. Over.”

We came out of the gate, about midway into the stands. In the center of the field was a large group of people, sitting, on their knees, some lying down. Most of them were younger, probably students, the rest were either teachers, workers, visitors, or refugees. There were approximately 200 people in the field.

Surrounding them was a small company of military personnel. I couldn’t identify who they were, but their patches looked like local Militia. There were approximately 25 of them. They had military vehicles on the field, surrounding the group of people. Each vehicle was manned with a gunner, for 12 in total. In front of the group was a large man yelling at the crowd.

Behind him were the bodies of 5 people, the grass around them soaked in blood, in front of those bodies were 5 more people knelt with their backs towards him. The rest of my team moved into position. There were 15 of us in total, our remaining 2 snipers moved higher into the seating area while the rest of the team spread out quietly into better positions.

I slowly made my way in to the field, walking with confidence but at a steady pace. I kept my hands where they could be seen and moved forward. As I did I could hear the large man’s words:

As I approached a warning was called out, and the gunners turned on me instantly.

I called out a greeting.

The large man turned and ordered me to stop, I followed his instructions and smiled. He demanded that I identify myself, so I did, I told him my rank, my name, my service number, and my position.

“What are you doing here, Colonel?”

I glanced at the badges on his uniform.

“I could ask you the same thing…Sergeant Baptiste is it?”

“We’re bringing order to the chaos out here, Colonel.”

“Doesn’t look that way to me Sergeant, looks like you are creating an order. These are people, not cattle. So, I’m going to ask you politely to stand down.”

“Colonel, the world has ended, people like you had your chance. It’s our turn now. The strong rule, the weak learn their place. Now because of your uniform I’m going to give you 30 seconds to leave this field, otherwise you’ll be the next one on your knees.”

Sergeant Baptiste ended the conversation as he turned to the people on their knees behind him and pointed his sidearm at the back of the closest prisoners’ head.

“As I was saying before I was interrupted. Know your place…”

As he said the words, I stretched my hand, clenching a fist and stretching out my fingers. My men immediately got the signal. The sounds of the shots were in such unison that it sounded like a single shot, followed by another shot. Within 5 seconds, all 12 gunners were down, as were 6 of the men standing guard around the group.

That left 8 and the Sergeant. Before he could react, I had pulled my sidearm and fired off 3 quick rounds before diving for cover behind the closest vehicle. The 8-remaining militia opened fire at the vehicle I was behind. I heard the familiar sounds of shots being fired from the stands around the field. Then an eerie silence.

I slowly crept out from behind the vehicle, all combatants were down. I made my way to the crowd, apart from the 5 previously executed there were no injuries.

We cleared the bodies of their equipment, loading it all in the vehicles. I also made it a matter of honor to tear off their badges and any identifying marks that they were the same as us.

As we were clearing the area, I was approached by an older gentleman representing the group. He identified himself as the Dean of the University, and explained what had happened.

The militia had shown up about a week ago. The survivors were mostly students and faculty. Anyone that stood up to the militia were executed. He had watched them kill 30 students and faculty since they arrived. He explained how the survivors had gathered here when the firestorm hit and most of the city burned. They were making due on what dwindling supplied they had, then the soldiers came.

They took everything, and used the students and faculty as slaves. They would take them into the city and send them into ruins to retrieve supplies, rather than risk their own. They had lost another 7 people to that. They also used them for some of their more carnal desires. The faster the supplies dwindled, the more people they would execute.

I attempted to comfort the old man, and assured him that we wouldn’t allow this to happen again. I explained that we were moving to a safer location and that they were welcome to come with us.

After a quick explanation to the group, we were enroute to our rendezvous point with the vehicles, supplies, and 4 buses full of people.

This little mission had been somewhat of an adventure. Part of me began to wonder if the woman in my head had known about these people. It can’t be coincidence that she sent us down here. I don’t like killing our own, but as soon as those men chose to ignore the oath they took, they became nothing more than murderers and rapists.

We’ve been travelling for about an hour now. We haven’t spoken a lot about what happened, I think most of my men are disgusted and ashamed. It’s tough not to take it personally when someone betrays the uniform.