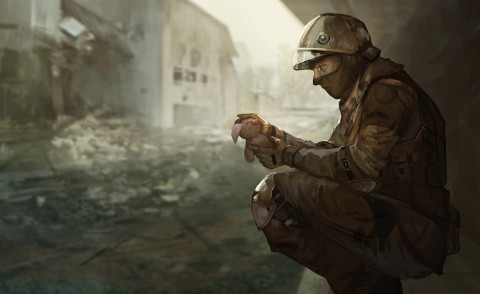 I haven’t been this far west since the impact. The landscape has changed, it was almost unrecognizable. As we moved by foot further out from the base on our scouting journey to what used to be the Kentucky border, I found comfort in gentle hum of the automated infantry units with us. I know the other members of my scouting party felt the same. We had all trained to work with these types of units.

I remember when I first entered the officers academy, we were told that they were the future, and that one day mankind wouldn’t set foot on the battlefield: It would all be automated. But I guess that’s great in theory, but do you really want to trust the lives of innocent people to emotionless machines that could contain glitches or even be hacked? I know that I certainly never found much solace in the idea.

As we moved through the silent streets of long abandoned towns, it started to really hit home how much we had lost. My trip to the base was never an eye-opening experience. It was more an exercise in survival. I never really had a chance to intricately think about what had happened. But after being swaddled in the protection of Fort Campbell, this outing has really shown how fast things have fallen. As we passed through the edge of a small rural town, we cleared the school building that we passed. As the automated unites systematically explored the interior, I never made it past the gated playground.

As I entered, my eyes immediately fell to a dirty and tattered doll lying in the dirt. My own daughter has one of these. It’s the Miss Molly doll: top of the line, datacube included, upgradeable AI. I can still hear its voice singing my daughter to sleep and playing games with her. It brought back a lot of happy memories and painful yearning. And I guess that’s why I’m out here. We need to move our group away from the growth, but it’s also a good excuse to keep them moving all the way to the west coast so that I can finally find my family.

As night fell we began to hear the noises in the woods around us. It had been some time since we’d seen the spore crazy, and they were quite the wave of terror when we had. And this time they didn’t disappoint. As my group came to an intersection, they burst suddenly from the tree line. There we approximately fifty of them.

These ones were different though, the visage of humanity wasn’t as pure. Some had strange growths on them, others were completely feral. All of them were naked. This time they all moved in a similar manner… lumbering is the best word I can think of. But fast, really fast. And instead of coming in a swarm, they were more coordinated. As the group charged at us from the front, the automatons detected others attempting to flank us.

We fell into formation immediately. The automated infantry positioning into a staggered diamond formation, while my squad and I used their large metal frames for cover and fired around them. We conserved our ammunition as needed, relying on the sensor systems of the automatons to “tag” the targets. As the robots began to rain down fire, we would clear any stragglers that managed to get through. We had dropped at least half of them when the group retreated into the forest: something else we had never seen them do.

There was something unnerving about the way they were “thinking” this time around. We didn’t hang around to find out what the next plan was. Keeping in formation, we kept moving down the road. We kept this up for an hour before coming to the outskirts of Poplar Buff, Missouri. It wasn’t long before we came across the small white metal building of the Poplar Bluff Police Department. It was even less time before we managed to override the locking system, get inside, and secure the building.

As I sit here writing this, we’ve locked it down completely. No sign of life inside, some food and drinks in the vending machines, a fair supply of weapons and gear, but that’s about it. We’ve stationed automatons on the entry ways, and I have a sniper on the roof, who I have to relieve shortly.