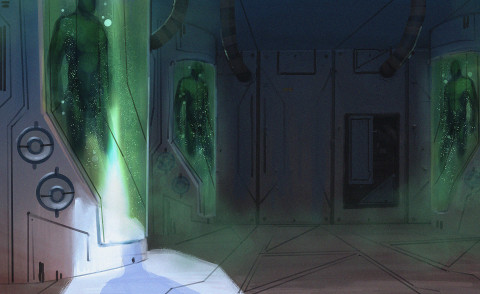 I spent almost a day in deep sleep. Whatever was in that hyper-syringe packed a punch. In that time, the techs had managed to gain full access to the facility. They had also managed to open up the database… This wasn’t an ordinary CDC facility. It was some sort of test lab for survivors. I don’t know where the residents of this place went, but they left quickly, and they left not too long ago. Ramirez is preparing a few surprises for when they return.

So far we’ve established that they have been using spores, plants, sap, and asteroid fragments to run tests on people. We’re not sure where these people came from, but there are hundreds of them, locked away in suspension tubes. I’ve never seen anything quite like this. The techs are still sifting through the data, but from what I hear it is not good. They were exposing these people to anything and everything they could find in order to see how they would react. Part of me wants to pull these people out of the tubes and get them out of here, but the other part is terrified what will escape with them.

At some point through the night I was moved from the couch into a medical wing. It has really helped to speed up my recovery. I’m still not completely mobile, but it doesn’t hurt as much and I can get around…albeit slowly. One thing is for sure: This place is well equipped. They have supplies coming out the ass. I’m not so sure about my original plan to use this place as a test facility, not after seeing what is here. I can’t bring those people out, but I can’t just leave them either.

As horrible as it might sound, I’m seriously considering blowing the whole building. It’s the humane thing to do. God knows what has been done to these poor folk. Some of the data I’ve been given to read over is enough to make your stomach turn. I read the description of one experiment that involved the sap from the growth being injected directly into a subject’s blood stream.

The screams were inhuman. You could hear bones break as he violently thrashed around on the table. And that’s just one of the nicer experiments. The worst ones were the spore tests: They slowly increased the spore content in a quarantine room and watched the outcome. Slowly these people began to lose their minds. I skipped forwards to the end where the ones that didn’t lose their humanity were beaten to death and eaten by the ones that did. The ones that lost their minds were then used in other trials, and a few of them are in the suspension tubes.

I’ve never been faced with true evil before, not like this. I’ve seen combat, and I’ve seen mad men, but I’ve never seen anyone that could dissect a person and put them back together just to see how they responded, not with such cool-clinical calm. The voices in the recordings were so devoid of any emotion that it was like they were discussing how to put a table together.

I’ve heard the speech before – that this sort of thing is how advancements are made – it’s how we beat the enemy. But we’re not at war, we’ve already lost the war, and it wasn’t an enemy we saw coming or we were prepared to meet. There is no practical application for any of this, so what are they planning on doing? Creating an army of mentally unstable spore soldiers?

There isn’t anywhere left to conquer, and as time goes on I’m starting to notice a real shortage of people to conquer. What’s left are places like Fort Campbell and what we’re building or random havens with people hiding in the shadows. I’ve seen no sign of anything truly resembling civilization in months.

I’m not sure what my plan is for this place, but I know one thing, we’re going to wait here until those sons of bitches come back, then we’re going to get some answers. And if I don’t like those answers… Well, I don’t know what I’m going to do, but I do know that it’s not going to end well for these psychos.

What in the hell is wrong with people these days? There is barely anything left, so stop destroying the last vestiges of humanity. I need to take some time to process a lot of this. I’ll continue this entry tomorrow.