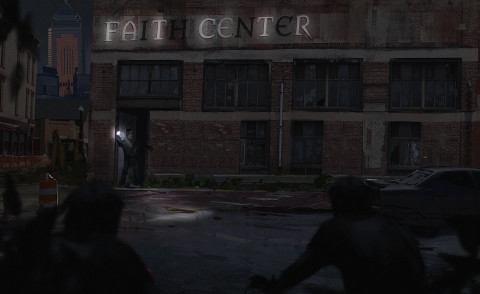 We’ve been on the road for two days now. Our initial plan was to make the three-day march to Fort Campbell by following the roads. This went well for the first day. The night we left Lexington we kept walking until we couldn’t see the skyline; then camped down for a few hours. We used an abandoned van as a shelter. It was nice to get out of the impact winter. That first day went pretty uneventful. We rested, ate, and scavenged what we could from the vehicles around us.

As I sit here writing this, the sun is setting and we’re trying to find a way out of our new refuge. We’re less than a day from Fort Campbell. I’m looking forward to getting there – just to be somewhere secure – the last night was almost more than I could handle.

We had left the van behind us and decided move at night. It gave us cover from anyone following us. The idea was great in theory, but we hadn’t really took the time to understand the changes taking place around us. I’d been caught in one circumstance after another.

It was about an hour after sunset when Jackson felt we were being paced. I had felt it, too. It wasn’t so much definitive evidence as it was just a sixth sense that something was moving with us in the tree line. We didn’t get our first real sign until we saw something dart between a fire gap in the trees. Whatever it was, it was fast and agile. Sanders and O’Donnell were pretty convinced it was a pack of coyotes. I wasn’t so sure. I’d shot my fair share of coyotes, and this thing was bigger: No, it was more than that. It was the way it moved.

As we moved further down the road, Alvarez caught something coming at us from the tree line, and without thinking he took a shot. As the bullet tore into the muscled chest just below the neck, the deer collided with a car about 3 meters in front of us. The echo of the shot rang out; it sounded louder tonight. As I shook the ringing out of my ears, I watched the pooling blood soak into the impact snow that had been our permanent companion. After the initial shock left and the foolish paranoia lifted, we realized that we had just bagged ourselves a meal that would last to Fort Campbell and then some.

As Sanders drew his knife and moved to start gutting the deer where it lay, the forest around us erupted in sound. Snarls, screeches, screams, unnatural sounds. That’s when they came, hundreds of them – people, well, what used to be people – I didn’t really know what they were anymore. I’d had a run in with this before, but not on this level. They moved like animals – some ran on all fours, others almost galloped; It was the strangest thing.

There were all types: small, large, thin, fat, most of them were caked in dirt and blood. Some were naked, others wore torn clothing. Some had what appeared to be fungus growing on them. We didn’t hesitate. We pushed the girls into the car beside us and took positions on both sides. We then unleashed hell. Shot after shot rang out. As fast as the bodies dropped, others replaced them.

After the initial attack the rest fell back into the tree line. We grabbed the girls out of the car and started down the road in a full run. They followed – growling, hollering, and screaming. As I ran, I thought about those first ones to cover the gap from the trees to the road, and I haven’t really had time to process it, but I’m pretty sure some of them were children. I tried not to think about it. I just kept running.

We ran for what felt like hours, but was really only minutes. As we headed further down the road, the trees began to recede and open fields appeared on one side. That’s when we saw the big white building. As Jackson aimed his light at the building, the large sign that said “FAITH CENTER” was revealed. On my first impression it was defensible, very little windows, solid square walls, two exits.

We hit the first door running. The chain hadn’t even been locked. The lock just hung there. As we ran through, I grabbed both, slammed the door behind us, chained the handles, and locked anything and everything that was mechanically possible. The automatic security system was no help, as the power was out, but I managed to pull the override on the magnetic seal and completely secure the door. While I did this, the others checked the rear door.

We heard them hit the walls within minutes: clawing at them, banging against them. We split into two fire teams and covered both doors. The doors were holding, so were the walls. It gave us time to check out supplies: we had very little ammo, we were all exhausted, and our water supply was running dangerously low.

We’ve been here for a few hours now. They seemed to back off as the daylight arrived, but randomly something will try the door. We looked around and found most of the necessities. There are blankets, canned food, and a few big jugs of water for the water coolers. Apart from the mindless killers outside, it’s a pretty comfortable living condition.

I need to get some sleep, but we’re going to make a run for it during the twilight hour. We have a plan. It’s not a good one, but it’s something.