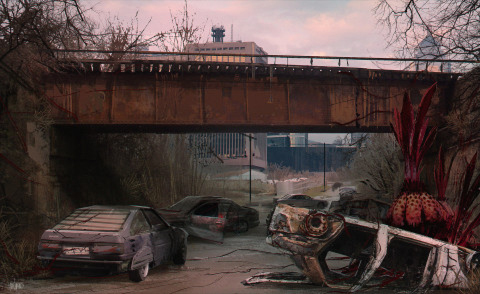 Things appear to be taking a better turn since my last entry. The truck got us to Lexington, Kentucky. It was pretty slow going as dead vehicles were strewn all over the roads. We took it slow and easy. The ride was quiet: The only words exchanged between my passengers were pleasantries. After what they had been through, I didn’t expect anything more, nor was it needed. We stopped in Huntington to eat and clean up. The place was a ghost town, partially due to the rapidly-moving growth that was coming up from the river.

I tossed a large stone out to the edge just to see how fast it was moving. While I waited, I started going through the back of the truck, trying to see what exactly was in there. Mostly it was useless junk, luxury items, expensive trinkets, a large fusion generator.

But there was one thing that caught my eye. Buried in the back, below gold-framed pictures and food processors, was an antique cavalry sword.

This relic was in good shape. It had obviously been meticulously cleaned by the previous owner. From its shape, it was pretty obvious that it had seen its share of combat. I pulled it out and took it outside into the daylight to get a better look. It was definitely a field-use weapon: There were no engravings, nothing impractical to it. I tossed the sword into the cab of the truck and went to check on my stone.

We had only been here for an hour and the growth was at least 20 feet past the stone. It was remarkable how fast it was spreading. But I started to notice a pattern to the growth. The areas that were ripe with vegetation seemed to fall much faster than stone, concrete, or anything man-made. It seemed more like it was assimilating the vegetation as opposed to replacing it.

I could watch blades of glass slowly wither then regrow at an alarming rate with a strange blue coloring. That was another thing: I had seen so many variations of this vegetation: different colors, different plants, weeds, vines, what appeared to be trees. I shook myself away from my thoughts and quickly headed back to the truck. The girls were done by this time, and I was happy to put this place behind us. It’s a strange thought, but by now the whole town is probably engulfed.

We followed Highway 64 into Lexington. It wasn’t long before I realized we needed to abandon the truck; the roads were packed with abandoned vehicles and the city itself was on fire, the skyline was glowing in a fiery halo. I grabbed my gear, attached my newly acquired sword to my hip, and we set out the rest of the way on foot. I knew this area well, I was stationed not far from here.

In a matter of hours I would finally get to see my wife and daughter. It was all I could do to not run the rest of the way home. But I remembered that I wasn’t alone, and that I needed to stay calm for all of our sakes.

The walk into Lexington was uneventful. We slowly made our way around the suburbs and into the edge of the city. As we wound our way into the core, I could hear gunshots ringing from within. Every time that familiar crack went out into the air, my huddled companions jumped. It was starting to get dark, but we needed to keep moving, a city this large could hold all sorts of surprises and I wanted to be clear of it before we lost all light.

We stuck to the streets where we could hide in the shadows of larger buildings.

As we rounded the corner onto Upper Street, shots began to ring out. They were probably less than 20 meters down the road. It sounded like a small caliber weapon: civilian grade. Then another shot, followed shortly by a succession of matching sounds.

Within seconds a cascade of gun fire began. Suddenly I heard a larger caliber automatic weapon respond to the orchestra. This one was different: It sounded like an XR200 – that was military grade, and I knew that there were only two types of people that would be carrying that, and I wasn’t sure I wanted to run into either of them in a situation like this.

I signaled for my group to drop back into the doorway of the large stone building we were pressed against, it was deep enough to get us out of the moonlight. As we huddled quietly in the shadows, it felt like time had fallen to a crawl. Within what felt like minutes, but was probably thirty seconds, a small group of four men wearing Marine fatigues slipped past. As they did the youngest of our group, Tasha, let out a small yelp.

Immediately, the group turned as one, their training kicking in. With a unison that could only be gained from the strict and specialized training of the Marine Corps, the squad retreated behind cover, never taking their weapon barrels away from their sightlines. As they fell back behind a large truck, I quickly yelled out “White Rabbit,” within seconds the familiar response: “Go down the hole,” echoed out from behind the vehicle. Before we could get another word out, a large group of armed men flew around the corner – on my initial glance I counted twelve. This quickly became ten as two fell from the Marine’s fire.

The scraggly group moved past my location trying to flank the small squad. As I pressed backwards against the door, it quietly swung open. In all the excitement I hadn’t bothered to check it: rookie mistake. I signalled my small group to head inside, and pulled the door closed. In what would be the last mistake he would ever make, one of the men moved to close for my own comfort. As he backed into the shadows that hid me, I stepped out grasping him around the neck and pulled him onto the blade of the sword that now accompanied me on my hip.

As his body stopped kicking, I slowly lowered it and drew my sidearm. I ran out of cover, firing as I moved. My first shot found its target: catching a large unkempt man in the chin. I dove over the hood of the closest car as two shots rang off the metal behind me.

I heard the footsteps moving around my cover. That’s when I heard the marine shots ring out, and the footsteps retreated. I leaned around the front of the vehicle and let out two shots. My first stuck the knee of the man leaning against the brick corner, and my second found the chest of his companion. As they both fell, Marine fire finished the wounded one. Blame it on inexperience, or adrenaline, but the remaining five decided to rush the vehicles. The first I caught in the foot, as he fell I placed another shot through his eye.

Three more fell as the Marines burst fire tore into the group. The last fell over the body of his fallen comrades, as he hit the ground I placed two shots into his back.

As the ringing silence began to take control and the sound of my heart beat dominated the night, I heard a gruff voice yell “Clear!” The small group of Marines made their way out from behind the large vehicle, never lowering their weapons. They slowly made their way over. One had his sights trained on me, another covering the bodies on the ground, and the final two covered the sides and rear.

As I slowly placed my sidearms back in the holster, the squad called to my small group hidden inside the building. As they slowly filtered out of the building, the terrified looks on their faces caused the soldiers to relax the grips on their weapons, slowly lowering the barrels.

After quick introductions, I suggested that we get off the street. The leader of the group, Corporal Sanders, indicated that his group had been assigned to a larger patrol that was sent into the city to search for survivors. He gave me a quick briefing. Intel had reported that this area had been pelted with smaller asteroids. Fort Campbell had sent out aid, but what they had found wasn’t what they expected.

Most of the survivors had already left the city, and those who remained  were feral-like. The air was filled with a strangely colored haze. Their squad commander, Sgt. Baker, had ordered the incineration of the dead where they lay. He was afraid of some sort of outbreak. In retrospect, it wasn’t such a good idea. As soon as corpses sparked into full flame, whatever was in the sky also started to burn.

It was like a firestorm, quickly the whole city was blanketed in a hellish blaze. It was around this time that the group was attacked. Before they knew what was happening, shots began to ring out from high vantage points, and alleyways all around them, the ambush had caused them to lose half their squad within the first ten minutes: Baker, Garrett, Chang, and Czineski. That left Sanders, Alvarez, Jackson, and O’Donnell alone and outnumbered. They chose to make a strategic retreat out of the lines of fire and to somewhere that was a little more defensible. That was when they had run into my group.

They explained that they were planning on making the run back to Fort Campbell, but it would take a few days. As I listened intently, I couldn’t wait any longer: I asked if the base had suffered much and if they had seen my wife and daughter. They explained that the civilian base population had been shipped out west to Edwards AFB, as reports had indicated that the east coast was going to be hit the hardest. They had lost communication shortly after the strikes, but there was a hardcopy of the passenger manifest at the base.

We’re a day into our journey to Fort Campbell. The area between here and there is littered with the strange growth. But I’m so close. Even if they aren’t there, at least it gives me hope that they are safe and away from this madness. And once I’ve loaded up on supplies and equipment, I can make the trek out to them. I just need to get more intel on the situation out here, so that I can put some sort of plan together.