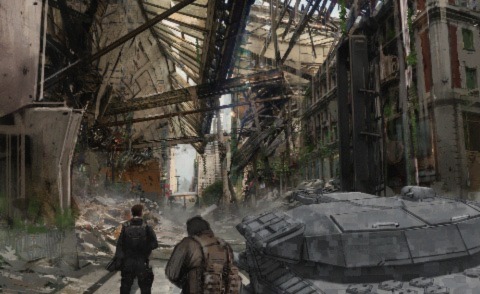 So far, so good. We’ve established safe zones for approximately 400 miles. Along the way we’ve managed to gather a collection of buses, which is not only convenient, but makes me wonder why I never thought of that before. The route has been relatively uneventful, the few “ferals” we’ve seen were immediately eliminated by the automated infantry.

We have several recon forces pacing the vehicles, but I’ve decided to keep the majority of our forces around the equipment transports. I made a bit of a rash decision, but I decided to bring not only the bases memory core, but the plasma power core also. Nothing like riding along with a cataclysmic explosive in your trunk.

We should hit Springfield, Missouri, by nightfall. We’ve setup a safe zone in a large outdoors store, it has a series of warehouses and production facilities attached, including offices and a hotel. It took some extra work to ensure the area was clear, but I think it will provide some much needed sense of security for the civilians.

I don’t really know what happened in this city, but it’s pretty levelled. At first I thought it was related to the impact, but the more we move into it, the more I notice damage from small weapons fire and explosives. Something big went down here, which worries me. It’s a risk to use this area, but I felt it was a necessary one.

I just hope whoever had a private war here has moved on, the last thing I need with all these civilians is a large-scale firefight. We’ve brought some heavy gear with us, including several tanks and APC’s. But I’d rather not be responsible for levelling what is left of this place.

We’ve been sending drones out further ahead, and I can finally confirm that a large chunk of space shit landed in Kansas. Well, what used to be Kansas. It’s pretty much a giant forest of murderous plant life now. The haze from all the spores in the air does some beautiful things with the light though. Who would have thought that something so evil could contain something so beautiful?

I was planning on attempting to retrieve some pieces of the larger fragment for later study, but it’s not worth the side-track, or my people. We have gained some knowledge from it though, the “ferals” flock to places like this, the drones picked up packs of them heading into the growth. I don’t know how it doesn’t kill them, they almost seem to enjoy it. I’m not really sure what good this knowledge is other than a reminder to keep the fuck out of evil plant world.

Once we’ve bedded down for a few nights, we’re going to move a little further south, the plan is to head through Oklahoma City and see if we can gather any additional supplies before continuing west. At our current rate, with stops for the civilians, I’m estimating it will take us approximately 7 days to get to California. That’s provided we don’t have to take some major detours and that the cosmos doesn’t try and chew us up and shit us out before then.

I’m not hopeful, but you can damn sure bet that I’m going to be prepared. We’re so close now that if anything gets between us and the destination, they’re going to experience a whole hell of a lot of pain, and probably some serious killin’ too.