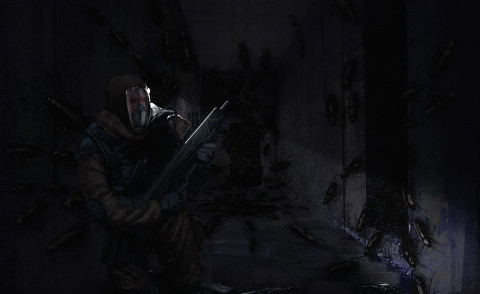 It’s been 8 days and still no contact from our scavenger team. They were assigned to enter Nashville and recover whatever supplies and equipment they could. With a self-sustaining power source and a top of the line communications array, it was the ideal location to retrieve the parts that we needed.

Our earlier reconnaissance reports indicated that the city was abandoned, although it had taken significant damage from the asteroid fragments, its normally sparking skyline shattered into shards of broken glass and rubble. I don’t know if it was the lushness of the city, or something else, but the growth took it fast. By the time our initial team had scouted the area, the majority of the landscape was completely consumed.

We had prepared for this. The team was equipped with the latest in decontamination equipment. According to our tests they should have been safely capable of entering the contamination zone and retrieving what we needed. Something we hadn’t accounted for must have happened, and I fully intended on finding out.

The morale of the base had been pretty good: we offered protection, food, and the basic luxuries of peoples’ old lives. We’ve taken on a role of guardian to those that need it, and trust me, a lot of people need it right now. People believe our world has fallen, that we are refugees and resistors to the changes going on around us. They even gave us a nickname: The Freedom Fighters. I’m not so sure about it myself: It’s pretty corny, but if what we’re doing symbolizes freedom to people, then they can call us whatever they want.

My team exited Fort Campbell as soon as the sun fell. The world is safer at night. The plants and the corrupt life that now roams seems to thrive under the sun. Darkness has become our ally. I let myself fall into a light sleep, focusing on the rumble of the wheels as our small troop transport rolled down the empty roads towards the city of music. I slept for around an hour before we saw the disfigured face of the once beautiful city. The roads were beginning to become congested. As I was considering whether to pull over, we noticed the outline of a familiar shape ahead: the scavenging team’s buggy.

We pulled up beside the buggy and investigated the area. There were no signs of trouble or combat, the buggy was undamaged. The decon suits were gone, as were the troops gear. We secured our vehicle, put on our decontamination suits and continued the rest of the way on foot. The walk was strangely quiet, the moon reflected off the spores floating in the air, giving the remnants of a once great city an unnervingly glowing aura.

As we entered the outskirts of the city, it was like entering an alien world. Vines, plants, and strange growths had infested the whole city. Giant skyscrapers with their bases wrapped in the growth, some of it growing up multiple stories. It had grown onto everything: cars, bodies, buildings. There was nowhere safe from it. As we moved through the streets, it became so thick that I had to draw my sword and begin slashing a path through. With each swing a trail of glowing liquid splattered around us.

We marched through the otherworldly jungle for what felt like hours before coming upon the power center. The area was completely untouched, it didn’t appear that the team had made it this far. We entered the dark building and made our way deep into its corridors. We cleared each room as we passed and made our way to the lower levels. It was here on the lowest levels that we found a lone combat helmet. It was definitely one of ours. The team had made it in this far. The question was where are they now?

We moved into the core control room and surveyed the area: the containment room had been breached. There was a massive hole in the floor leading into foreboding darkness. The anti-matter core unit itself appeared to be in perfect shape, but the safeties had kicked in as soon as the chamber floor had given way. We quickly entered the room dismantling the containment unit for the core and taking the parts we needed and whatever extra that we could carry. That was when we heard the first scraping sound: it was distant and barely discernible, but it slowly grew louder.

As it grew closer the scraping became a scuttling. We backed out of the room and into the stairwell. Within seconds the hole erupted in a volcano of shapes. Thousands of large cockroach-like creatures rushed from the void, climbing over one another, each one the size of a sewer rat. They flowed out the door and straight toward us. I gave the fire command, and we let loose hell on them. But as fast as we could fire, more replaced them. We weren’t going to win this battle.

As they rushed the door, I pulled a plasma grenade from my webbing and tossed one far back into the room. As it sailed through the air we began running up the stairs. As we reached the next level, I dropped another down the stairwell. The blast shook the building, and we could feel the heat from the plasma searing the area through our suits, as we reached the main floor we threw one more through the doorway and exited the building as fast as possible.

Our previous path had already overgrown, so we just ran straight into the growth hacking away with abandon. We didn’t stop swinging until there was nothing left but air. What had felt like hours worth of time when we entered, had become minutes as we left. As we exited the overgrowth, I surveyed our flank. The bugs hadn’t followed. I’d be surprised if any had even made it out of the building. As I stared into the twisted forest, I saw the light of the burning building we had just left, like a candle in the distance, the strange green flame dancing as if to an unheard song.

We returned to the vehicles, loaded into the both of them and began the drive back to the base. As we drove in silence, all I could think is that at least we knew what had happened to the team.  I know that those things will be in my nightmares for a very long time. I can’t imagine that kind of death. How many more of those things are out there? Every time I think I have a handle on this world, I’m always sorely mistaken.