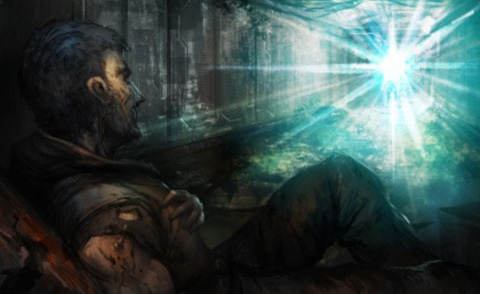 The last few days have been agonizing, I was sure that I was losing my mind, I had become convinced that the spores had gotten to me. I was becoming something else, some twisted and hateful creature…turns out it was a mix of pain, the meds, and me being an asshole. But at least I’ve finally gotten an answer to what has been going on with me.

At approximately 0300HRS this morning the answer became very clear. I was writhing in my cot in what I can only describe as the most painful, skull shattering spasm that I had ever experienced, when it all suddenly went black. I could hear a loud ringing in my ears, and then the voice. It was then that I saw her stand before me, whispering into my ear…

“Colonel, I must apologize for my difficulty in communicating with you. With the global communication systems down, I have had to reroute a very specific frequency directly into your ocular implant. Once again, I apologize for any discomfort.”

It was then that I saw her stood before me. I had never seen anything like that before. She was breathtaking. A statuesque woman made of a blinding blue light, her flowing robes shimmered and moved, it was like they were made up of symbols that were constantly shifting. More importantly, the pain was gone. I had considered the fact that I had finally completely lost my mind or that I had lost my battle with this twisted and dying world.

“Colonel, I assure you that I am a friend, and I need your help. There is a facility approximately 20 miles south of your location. It will not show up on any map, but I will supply you with the coordinates. I need you to locate this facility, access the communication array and redirect it to a new geo synchronous target. That is all.”

There was no way that I was redirecting my people on a fool’s errand because the sparkly woman in my head told me too. But that’s when she said those magical words…

“I am prepared to assist you with locating your family. I have coordinates to their current location.”

I didn’t need their location, I knew where the evacuation took them. I just needed to get there.

“Your current destination is incorrect. The evacuation had to be rerouted due to impact zones and infestation expansion. You are directing your personnel into a red zone, you will receive numerous casualties as a result.”

And that was it, I received a set of coordinates that directed us south as she had indicated. I don’t know what is down there and I’m not willing to risk my people on it. But I am willing to risk myself. I let my staff know what had happened, and that I intended to go through with this. There were various voices of opposition. Talk of me not being competent, everything they were supposed to do. And when they realized that they weren’t going to be able to stop me, they did the only thing they could do: they started gearing up and planning the mission with me.

I don’t know what I ever did to deserve this type of loyalty, but it humbled me to the core. As much as I tried to talk them out of joining me, it became apparent that they had no intention of changing their minds. The concession that they made was that the main force would continue on to our next point and we would rendezvous with them as soon as possible.

The coordinates we were given appeared to be in a farming field near the University of Oklahoma. We had no idea what the terrain would be like in that area, or even if a facility would have survived the rocks. At the same time, we’ve decided that we will also venture half a mile further south and investigate the University campus. There could be survivors or supplies, so it’s definitely worth the short jaunt.

The plan is to locate the facility, breach it, clear any defenses and dangers, realign the comm unit, and get the hell out. Easier said than done, but after the last facility I visited, I’m not going to be caught outgunned. This time we’re bringing some EMP rifles, and loading up our weapons with armor piercing rounds.

We’re also going to use the drones to surveil the surrounding area, any intel they can give will make the job easier. We’re bringing large packs with us, but emptying them of all supplies but a day’s ration of water. The plan is to fill them with anything we find for the march back.

This is our last night in the zoo. It’s made a pretty good refuge, and if I hadn’t been in so much pain the whole time, I think I really would have enjoyed it. The last few hours that I’ve been pain free have brought back some really great memories of the time we had visited here with my daughter.

She was obsessed with the elephants, I can still hear her endless giggling every time the little ones would tumble over while playing games. I had bought her a giant stuffed elephant from the gift shop before we left, I snuck it into the back of the car while she fell asleep in her seat. I remember her face when she woke up next to it in her bed the following morning…

I don’t know who this woman is, but if she can get me back to my family, then that is all that matters. She might have been lying, but for someone to go to all that trouble to reach me, there has to be more to it.

I’m about to get the first real night’s sleep that I’ve had in 3 days, then we’re heading out at 0500HRS. I’ll try to write an update when I get to a safe location. I’m also going to leave a copy of my journals with Staff Sergeant Parks, he’s promised to deliver them if I don’t come back.