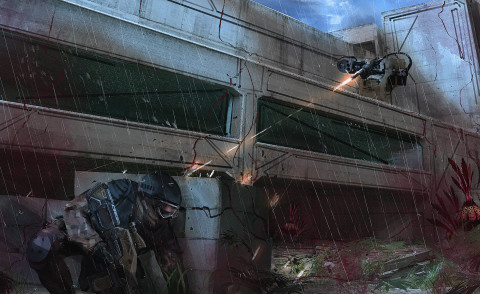 The storm came in quickly, as we entered the outskirts of Louisville, the curtain of lightning began to fall. We made camp in the back of the truck waiting out the storm, there was no point trying to fight our way through the growth while battling the skies anger. I looked around the crowded compartment, I could see that everyone was nervous, especially the techs. They weren’t used to deployment, all of them except one were civilians with little to no combat training.

We didn’t know what to expect out there, early in the day we sent a low flying drone over the city, it was tough to make out certain areas, some were covered in growth others burnt or damaged from the asteroid shards. Unfortunately we couldn’t map the whole area, there was too much interference that if we flew it too far out we would lose it.

As we made our way to the city, we stopped in strategic locations and planted communication buoys. It allowed us to stay in contact with the base and to keep our ocular implants active. I’m not sure how well it will work once we’re in the growth, we’ve not really tested that too much. They tend to mess with electrical fields quite a bit, it has been suggested that it is something in the air.

We waited in the truck for 4 hours before the storm slowed enough that it was safe for us to attempt our foray. We exited the transport, our HUD units immediately moving into night vision mode. The growth was thick around the road we had stopped on. It took some effort to chop through the first parts, luckily this time we had brought some energized-blades, they made the cleaving considerably easier than my antique sword.

We had made it approximately 30 minutes into the city before the first sign of life hit us. As we chopped through a stubbornly thick section we entered into what at first glance appeared to be a bubble in the growth. It didn’t take long to realize that we’d stumbled into a feeding ground. Within seconds the bugs came at us, leaving the plants they were devouring.

This time I had come with a plan. I stepped back and Ramirez stepped out with a plasma thrower, he began spraying the area with scorching plasma that disintegrated everything it came into contact with: plant or bug. We waited out the burn, listening to sizzling as the rain fell on the heated area. Once the thermal bloom had dropped, we entered the scorched area, moving through to the opposite side and beginning our trek into the city core. It took us 3 hours to reach the CDC building, its barricades consumed by the growth, the only break between the building and the growth was a 20 foot gap between the outer walls of the compound and the inner building.

We slowly approached the edge of the walls, moving towards the overgrown and twisted gate. The building itself was lit up, there was power there, the question was: are there people too? The answer to that question became readily apparent as I popped my head around the gate. The first shots missed me by inches, I quickly ducked back into cover as I could hear the laser shots pinging off the plasti-steel wall behind me. I changed my vision mode to thermal and dove across the opening of the gate to the wall on the other side, Ramirez firing wildly around the wall to give me cover.

As I moved I tilted my head to the side to get a quick glance into the compound before landing in a roll. I couldn’t make out any heat signatures other than the actual shots themselves. I called over to Ramirez to confirm, he hadn’t seen any either. Whoever we were dealing with had to have been wearing dampening equipment, maybe stealth suits? But that wouldn’t make any sense unless they were military special forces or government intelligence units. As I sat there formulating a plan, the first enemy made an appearance.

The gates suddenly flying free from their hinges and crashing into the overgrowth. I moved backwards as fast as I could as the 7 foot metal behemoth came past the wall. I’d never seen this model of automaton, definitely military grade but smooth and vaguely humanoid. As I began pumping round after round of plasma into where I assumed its sensor unit was, Ramirez aimed at the legs, his energy enforced blade striking the slim joint of the ankle. The metallic combatant began tumbling forward. Taking advantage of the moment, we both pumped round after round into the back of the beast, melting its core shielding and eventually the core itself.

Now we knew what we were dealing with, this time I switched my vision mode to electromagnetic. Immediately our combatants popped up. There were 7 more units visible and 2 auto turrets above the door. I’d never heard of a CDC being this heavily armed. Whatever was in there must be important, which was making me seriously reconsider this venture.

We hadn’t brought enough firepower for this situation. With just Me, Ramirez, and 5 civilian technicians, we were out gunned. Or were we… I hadn’t thought about it before but we had brought with us a breach gun and some EMP charges in case we came across mag-locked areas that we needed to open. The breach gun only had 5 rounds, it was a compact rail gun that was used to blow holes through thick metal surfaces protecting reinforced doors so that we could drop the EMP charges in and fry the electronics and magnetic systems. The charges weren’t all that powerful, but if I could blow a few holes through these bots and daisy chain them together, it should set a big enough field off to take them out. We just had to make some gaps in the shielded armor protecting their cores.

We had the techs lay down cover fire as Ramirez and I bolted through the gates towards the first set of inner barricades. The auto turrets were focused on the wall where the cover fire was coming from, it gave us enough time to make the run safely. As we both dropped down, we rolled around the sides pumping plasma rounds into our attackers. With a focused effort we managed to drop another, but the other 6 start moving forward, as they clumped together we both lobbed plasma grenades in unison, the blast rocked the barricade and sent the bots tumbling, the ensuing heat was enough to confuse the turrets sensor systems.

I didn’t wait for them to compensate, I ran out from behind the barricade with the breach gun, the first round blew straight through a particularly damaged unit, destroying the core. My second round took the top part of the head off the next one, damaging its sensor units. The third round clipped through what should have been the hip area of the next as it began to rise. The fourth; blowing the leg off his companion rising beside him, and the fifth round took the left arm clean off another rising from behind the opposing barricade.

It was at this point that I realized my mistake. I’d been so gung-ho to follow through on the plan that I hadn’t considered an escape. As the bots turned towards me I felt the searing heat of a laser blast as one of the auto turrets clipped my left side and right thigh, I buckled and went down hard. As I hit the ground I heard a sudden ringing sound, my optics suddenly going black. I lay there knowing that I was dead, it felt like hours. Suddenly the silence was replaced with more ringing as my vision cleared and I saw Ramirez dragging me towards the compound door.

We’ve been inside the compound for a few hours now, one of the techs named Tom Marshall had some medical training, he’d used a med kit to clean and dress my wounds. I was in pain, and I probably wasn’t going to be moving fast, but I was alive. I know I am alive because it stings like a bitch, but I’m damn lucky, it could have been a hell of a lot worse. If Ramirez hadn’t tossed the EMP’s when he did… The kid deserves a promotion, which he’s going to get when we make it back to the base.

We’ve locked down the entrance here and made our way into the front reception area. It’s a pretty defensible area, and it has couches. We’re going to bunk down here for the rest of the night and make our way through the compound in the morning. It will also give our techs some time to attempt to get into their systems to figure out what other surprises are waiting for us and hopefully shut them down.