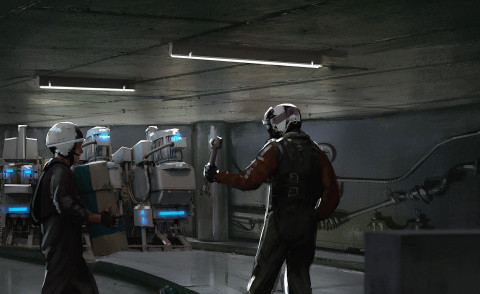 Life is hard: a concept that only mere months ago was foreign to us. We’d lived in the lap of luxury. Instant information, faster than the blink of an eye. Automated slave labor, robots doing the jobs that people no longer wanted to do. Lives becoming nothing more than hedonism and greed. We have taken everything we had for granted.

The Fall didn’t happen overnight, although in some places the tragedy and damage was done instantly, but as a country, we were slowly consumed. I think about how we would have reacted to this if we hadn’t arrogantly believed that we were the center of the universe and that our infallibility would conquer all.

What if someone in power had just said: “Hey, wait a minute, maybe we should have a few plans on how to deal with these types of situations. Maybe we shouldn’t abandon our people and run for cover.”

But as I write this, I can only think about how proud I am of the men and women around me, of their composure and their steadfast determination to survive. As of this morning we now have a fully functional anti-matter power supply. It was the first time in weeks that we have been able to fully power up the base.

Within a matter of minutes of the main computer core coming online, my PADS unit initiated. My ocular HUD immediately scanned my surroundings and displayed the relevant data. A short time later I watched the automated units come online, the IA5 units suddenly lurching to life, updating their memories on the latest events and immediately beginning their patrol routines. At first it was unnerving to watch these 7-foot humanoid behemoths start marching around the perimeter, but that feeling slowly became excitement. At the same time I received numerous calls indicating that the automated medical units had also activated.

There was something soothing about the steady hum of the digital life around us. Now it was just a matter of increasing the range of the communications array, or finding a satellite that we could hijack. I have my best people working on it right now.

As the day went by, the refugees that we now housed had begun to relax. I even saw the odd smile, heard the unfamiliar sound of a laugh. As they relaxed, so did the troops – so did I. It has allowed me a moment of fresh air to look around and to plan. As soon as we get the communications up to standard, I plan on taking a platoon of Infantry Automatons and heading west. It’s time that I finished my trip home.

The air still isn’t safe to fly. There is so much dust and spores up there that the slightest friction could cause a firestorm, not to mention the volatile and random lightning storms that have begun blanketing the area. For now we have to stay grounded, but that doesn’t mean entirely grounded. I’ve commandeered myself a new RA15 Jump Pack: it’s in better condition than my old one, and hopefully this one doesn’t melt into a chunk of metal, but then again I don’t plan on swan diving out of a troop transport at 35,000 feet. I can’t wait much longer. I need to be out there. I need to find my family.

I’ve had an interesting proposal from some of my staff. They believe that the rate we are receiving survivors and with the growth spreading as fast as it is that we need to take measures to protect as much habitable area as possible. We’ve been doing tests on the plant life. It spreads fast, and it’s hardy, but good old plasma still burns it to dust like everything else it touches. We’ve started burning back as much of it as we can: it’s a slow process, and it regrows almost faster than we can make ground, but we think we can at least control and direct its movement by poisoning the ground it’s growing on. We plan on treating it like the weed that it is.

Some of the local people have suggested that we push back into the Clarksville and attempt to secure as much ground as we can, building walls, embankments, anything. I’m considering the idea. People can’t live on a military base forever. At some point we’re going to have to supply them a settlement. I’ve requested test results and logistics reports for such an endeavour. It’s ambitious, but if it’s feasible it will give them something to focus on while I’m gone. I hope for their sake, as much as my own, that we find some sort of foothold.