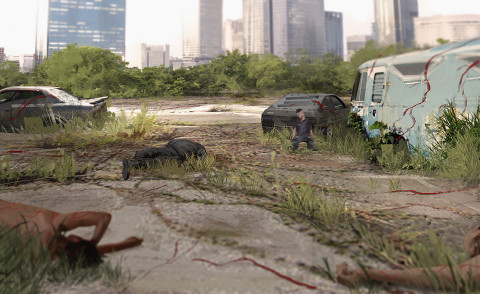 It’s been quiet outside for the last few hours. Our original plan was to use one of our group as bait, drawing those things out into the front parking area, while the rest of us ran out the back. The plan was to meet up at a designated spot within a few hours. We missed our opportunity. While we were coordinating they came back in force: screeching, banging, doing anything they could to get into the building.

This lasted for 6 hours. It then suddenly went silent, as if someone had flipped a switch. We waited for the sun to come up before attempting our plan. We realized that we didn’t know if they could see in the dark, but we sure as hell knew that we couldn’t.

Every man in the group volunteered to play the mouse. In the end the duty was given to Jackson. He was the youngest and the fittest of us all. He was an all-state running back before joining the Marine Corps and hadn’t let his fitness slip in the least. As we opened the door, Jackson took off in a full sprint. It was quite the sight to see a man his size move with such speed and grace. He was approximately 50 feet out before he stopped and began staring around him. Alvarez yelled out to him, so he slowly turned and beckoned us out.

As we exited the building with our weapons at the ready, we caught a glimpse of what had stopped Jackson dead in his tracks.

It looked like those things had just laid down and died. There were dozens littering the edges of the building, more in the parking lot, and even more in the field. Cautiously, we approached the closest body, and I gave it a solid poke with the tip of my rifle barrel. Nothing. As O’Donnell pointed his rifle at it, I drew my knife and moved in. Once again I prodded it. Nothing. I moved in closer. It was definitely dead. Its chest was unnervingly still.

We spent a few moments inspecting various corpses: all dead. There was still the odd movement in the trees, but it was slow and lumbered. We came to the conclusion that whatever had infected these people had run its course. Many lay with blood trickling out of their noses and mouths. Some were curled into fetal positions, others just lay still as if they had gone to sleep. All of them were covered with sores, bumps, lesions, and injuries of various types. A few had strange growths on them.

It was Alvarez that noticed that in the spots where they lay and bled that the grass had become infected with the growth. It had now started to slowly spread out from the corpses and into the field. We didn’t plan to stick around and see where it stopped.

As we walked away from the field, I realized that I could see the sun. For the first time in three weeks, I could feel its heat on my head. It was an indescribable joy. The impact winter had ended, and with it the rest of our march to Fort Campbell.

I don’t know how we walked out of that situation. Dumb luck, divine intervention, or nature lending a helping hand? But I do know that we have to get ahead of this, all we’ve been doing is playing catch up. One disastrous scenario after another. It’s time to figure out what the hell is going on and a way to combat it. The rest of the world can’t be like this too, can it? We’re hours from Fort Campbell. Maybe we’ll get some answers there.

As we pack our things up and get ready to move out, I feel a sense of calm. Maybe that’s an omen, or maybe it’s just the sun. Either way I’ve decided that I no longer need to write this journal for myself, but for my daughter. If I don’t make it to her, I want her to know how hard I fought to be with her, that I didn’t just lay down and die, that I challenged my character and my humanity on a daily basis because I love her with all my heart. Chloe, I’ll let you know as soon as I can how the rest of the trip was.