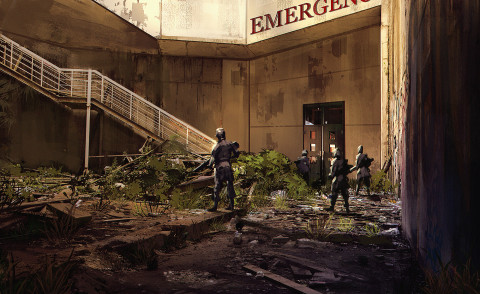 I know it’s been a month since I’ve last written. I’ve been so busy that I don’t even know what day it is. We managed to get the primary power system back online. It was a small miracle of engineering that they managed to repair the containment unit for the anti-matter core. It’s not perfect but it should do until we can find repair parts.

The communications array on the other hand is a bit of an issue. With no functional satellites in orbit, our range is limited. Not to mention the parts we are using have be jury-rigged from broken ones. I’ve sent a team out to see what they can find in the local area.

Even with the limited range we’ve managed to coordinate with the local survivors. We’ve had to expand our living area, we appropriated some shipping containers from a nearby transport yard and we’ve hooked them up as living quarters. They aren’t exactly five star accommodations but they do the trick. With the influx of survivors we’ve managed to pick up some emergency personnel, which has eased a lot of the stress in regards to governing our new population boom.

Yesterday was the first patrol that I managed to actually go out on. Things are changing fast. Most of the area that I had been through only weeks before was now completely engulfed in the strange plants. We haven’t seen much wildlife, either they all made a run for safety, or they are fertilizing the landscape. We also haven’t seen anyone afflicted with the spore madness. It’s almost like they all fell over dead.

The group I’m with is made up of a few sheriff deputies and Marines. We’re responded to a radio communication for help from a local hospital. The communication was picked up the night before, and it didn’t sound too promising. From what we managed to make out, they were attempting to fend off what we’ve affectionately called “marauders”. Roaming groups that have completely embraced the end of the world mentality and are living by an “only the strong survive” philosophy. We’ve come across a few of them over the last few weeks. So far they were all unorganized with low numbers and not well equipped. Scavengers and two-bit criminals mostly.

We came up on the hospital around dusk. The growth hadn’t quite reached this area yet, but it was well on its way. The building was fairly old, which was probably why it was so defendable. We scouted around the edges and counted four ground level entrances.

Two main public doors, front and side. A side entrance for emergency vehicles, and a fire exit at the back. The main doors were completely barricaded, and someone had pulled an ambulance against the emergency vehicle access then blew out the tires. That left only the fire exit.

Unfortunately, we weren’t the only ones that had realized this. As we came around perimeter wall we saw the group. About fifteen men with a mix of modern weaponry. Some appeared to be military grade, some high end sporting gear. The group itself didn’t seem particularly organized, but what they lacked in coordination they made up for in determination. They were hooking a chain up to the door and were preparing to pull it as a group.

I slowly lifted my rifle and zoomed the scope in on the building. I could see a small group of what appeared to be nurses looking down from a window above the emergency exit.

I raised my hand and gave the halt command. I then pointed at the window, the group, and gave flanking signals. My team was well trained, they would wait until my signal before engaging. I fell back into the street, quickly crossing the road and carefully climbing up the fire escape of an opposing building. I made my way across the roof and crouched by the edge. I could see my troops falling into position.

As soon as they were in cover, I took the rifle off my shoulder, rested it on the ledge, and took a deep breath. I took aim at the first man on the chain, and slowly exhaled. My finger gently caressed the trigger until I heard the familiar hum emanating from my weapon. With that I pressed firmly and watched as the plasma charge struck the man in the back of the head, exploding his upper body into a cloud of red mist. In the same instant, other shots rang out from behind the wall, as my team moved in. I took two more shots before the fighting subsided. Within a matter of seconds all fifteen men, or what was left of them were dead on the ground.

The mission was well worth the risk, not only did we manage to pick up some supplies from our fallen foes and the local town, but we also gained a dozen nurses and all the medical supplies we could ever want.

If everything else goes this way, things might start to be looking up. We haven’t heard back from our scavenger team yet, and if they don’t contact us within the next 24 hours then we’re going to have to go out after them.

I’m sure my command team are going to be thrilled when I tell them that I’ll be going on that mission too, it didn’t exactly go over well the last time…