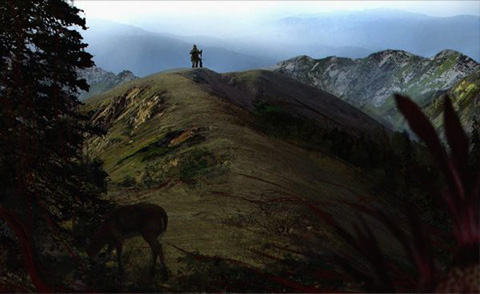 It’s been a few days since I’ve had the chance to write anything. The group I was with has turned north. They had heard rumor's that the growth couldn’t survive in the cold. I don’t know about that, but I do know that this world isn’t the same.

I’m not sure what was on that asteroid; but it’s taking over. Two days ago we had to circle back to avoid some pretty rough terrain, the area we went back to was completely overgrown with strange plants and vines. I had been there less than 24 hours ago and it was a lush green grove. Whatever this thing is, it’s moving fast. It’s been 2 days since I broke with the group. I’ve had to detour so many times that I lost count. I keep hitting these patches of growth.

Yesterday morning I came to a section of hillside that was completely engulfed with this stuff. Most of the local wildlife was giving the area a wide berth, but I spotted a small herd of deer out there. They were covered in sores and growths. Red patches of what looked like fungus. And they were acting strange, running in circles, falling over, one was repeatedly ramming its head against a large rock.

Since then I’ve been moving with very little downtime. I don’t want to stop and rest because I’m afraid that it’s going to catch up and overrun me.

So far I’ve determined that I’m heading into West Virginia out of Maryland. I’ve managed to put together enough information to figure out what’s going on.

The asteroid broke into pieces when entering the atmosphere, a section of it came down whole and did a pretty good chunk of damage, spewing up dust and all sorts of other junk. The impact caused something similar to a magnetic pulse, it knocked out most of the power and communications on the east coast. The rest of the asteroid rained down in pieces, they did a bit of damage in direct impact centers, but it was the fungus type substance that was on them that seems to have caused the most problems.

When the smaller ones impacted they threw a bunch of colored dust into the sky, one of the group, a botanist by trade,  had told me that it was similar to how plants spread their spores. Anyone or anything within a few direct miles of the impact sites started breathing this stuff in, those that survived ended up like the crazies that attacked us some days back. The rest just died painfully. The body would then act like fertilizer and huge patches of this stuff would start growing out of them. It started spreading quick.

Now I’ve seen places where it looks like the planet is trying to fight back, refuges from the growth. But they are few and far between.

Communications are damn near non-existent. Most of the satellites were taken out when the asteroid came in. Bandwidth based stuff doesn’t function on anything greater than an AM band, as the junk floating in the atmosphere is causing too much interference.

We managed to pick up an AM frequency a couple of hours before we parted ways, they didn’t know much more than us, just that things were bad. It wasn’t the space stone that got us, it was the shit that was catching a ride on it.