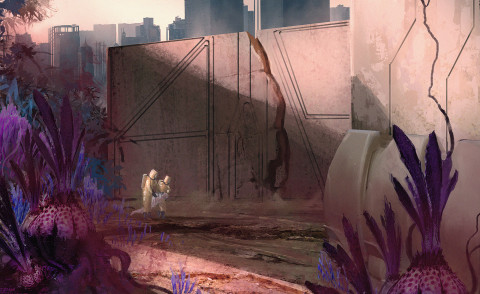 Another day has come and gone. So far no sign of the compound’s previous inhabitants. We’ve been making some headway into the data stored here, and the techs are converting systems for our use.

While patrolling the interior, Ramirez has discovered a lower level access door that seems to be completely disconnected from the main systems. The walls are also reinforced, so there is no way that we can brute force it. I had a tech look at the access panel, but it appears to have a kill switch on it. I’m afraid if we start tampering with it that we could permanently lock it.

I’ve also been feeling a lot better… although I’m still sore as all hell, I’m mobile again. I went to the suspension room and looked at the people floating in the tubes. I also started digging into the files and trying to figure out what they were doing. I’ve determined that there should be a full complement of staff here: twenty-two people.

We’ve seen no sign of combat, struggles, death, or anyone for that matter. The other people in the tubes are people that came here for salvation. As some fled the city, others headed to the closest government facilities. It seems the staff brought them inside, tended to their wounds, and then nothing. I can’t find anything regarding how they ended up in the tubes. What I have found are some of the procedures and tests that were being done on them.

One in particular has caught my attention. The staff here were trying to engineer a virus that would mutate the host system and help the body fight off the toxicity of the spores that are in the air. They did this by combining proteins from the spores into the virus itself. It didn’t have the affect that they were looking for. The mutation became uncontrollable and the host began exhibiting massive physical and neurological changes. I’ve never seen anything like it.

The military would have gone crazy for this shit. The changes increased the strength, speed, and resilience of the subject. The side-effects were out of this world: increase in mass, strange growths – almost plant like, and hardening of the skin. The biggest problem was that they became blood-thirsty, losing all semblance of humanity and becoming instinctual killers.

I’d seen the “ferals,” and these were something else. They exhibited a lot of the same behavior from the spore madness, but the physical changes were something from a nightmare. The personnel in charge of the studies noted a theory that similar affects could occur naturally over a period of time. They believed that various viruses mixed with the toxins in the air would mutate life in unknown ways.

There were others that were used as test subjects in order to study the effects of the overgrowth. Some of the testing was bat-shit crazy. They literally drugged people and threw them into the growth for extended periods of time, then retrieved the individual and studied the results. These test subjects were kept separate from the others.

The rest I don’t want to write about. We’re downloading the memory core into a datacube to take back to the base. The techs are going to stay here once we have everything set-up, and Ramirez and I will return to Fort Campbell and dispatch a security team to ensure that the area stays safe of any threats. Twenty-two people don’t just disappear into thin air, so I have a strong suspicion that they will return at some point, and when they do I want a heavily armed team here to meet them.

I have a lot of questions, and someone needs to get justice for these poor souls. I don’t know what the hell they were doing, or why they believe that they have dominion over man, but I’m sure as fuck not going to let these psychos roam around freely. I’m also going to send back some equipment to see if we can get that damn door open.