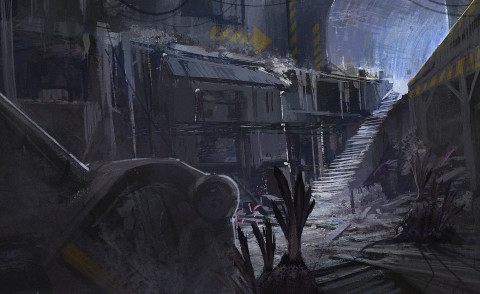 The fire from the CDC facility explosion spread more than we could have anticipated, as the spores in the air and overgrowth began to ignite so did the buildings that it pervaded. By the second night our drones were reporting a full city blaze. It burned for a week and devoured half the city.

The only positive I could find was that it destroyed a good amount of the growth, I sent a squadron of automatons into the remains of the city to search for life. We didn’t find any. I don’t know if that’s a good thing or a bad thing.

The techs have been trying to sift through all the data we brought back in the datacube. There’s a lot, and once we linked it into our systems we realized that there was a lot of hidden encrypted information there. It’s been a task just trying to locate it, let alone decipher it.

Something that has been a boost of morale has been the promotion of Cpl. Ramirez to the rank of Sergeant. And trust me, he deserves it. We put together what spare rations we could and had a little party to celebrate. It seems to have helped, but those of us that were out there still can’t shake the images that are in the back of our minds.

As the overgrowth spreads, it’s becoming a more time consuming task to keep it at bay. I’m starting to think that we’re not going to be able to hold it off permanently. I’ve had to start thinking about finding a fall back location. I think we’re going to lose this place eventually. I planned on going west at some point, but I have a feeling it’s not just going to be me anymore.

I’m going to let my staff know what I’m planning and quietly prepare everything necessary for transport. I don’t want to be stranded here, surrounded by death with no supplies, no weapons, and the lives of all these people that depend on us. I just wish we could take to the air, it would solve so many problems, but if we take one of the big birds up, it’s going to come right back down as the spores in the air plug the intakes.

And, at the end of the day, I need to finish my journey. I need to find my family. I’ve pushed it aside this long, put it on the back burner for the sake of the people here, but I don’t think I can do it anymore. In those quiet times, when I’m alone in the dark, I see them and I yearn for them. I never chose to lead, and if there was an alternative, I’d have been gone already, but I don’t see one at this point, they rely on me, and if I left them here to be swallowed by the damn plants, I would never be able to live with myself.

To make it all worse, it’s deep in the summer here, and Kentucky isn’t known for its mild temperatures. The cooling systems are working over time, and with the changes in the environment it’s starting to get damn right tropical around here. If we’re going to leave it’s going to need to be cooler, we only have so much vehicle space, we have kids and elderly, and in this heat they wouldn’t make it a day.