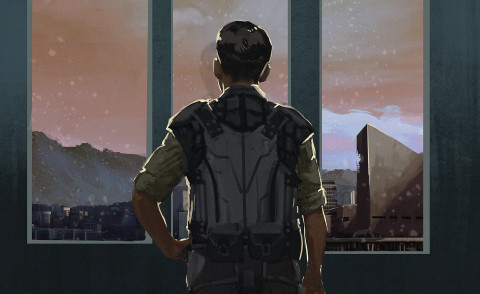 The mood has changed here at the Fort, with the light came a sense of comfort. With the automated units online, we’ve managed to make massive strides in construction of an outer wall and expansion towards the city. We’ve also made some significant repairs. I think we’ve done all we can do at this point. There isn’t much I can do to replace the satellites that were in orbit.

We’ve had some volunteers from the refugees that have been seeking aid. Luckily the base was formerly used as a teaching establishment, so it’s allowed us to recruit and train with ease. With VR simulations and intuitive AI instructors, it should only be a couple of months before our first batch of troops is ready for the field. Those that chose not to volunteer but are able bodied have been given work assignments, mostly in construction. Others have taken roles helping administrate the civilian population or tending to the various needs.

So far we’ve only had one group of dissenters. They were stealing ration supplies for themselves; I don’t know how long they have been doing it for, but as soon as the security systems came online, it was a matter of days before they were caught by the bots. Right now they are in the brig, but it has brought up a valid question. What do we do to keep law and order? The brig is only so big.

The worst part about all this is that it’s preventing me from continuing my journey. I would have already left by now, but every time I plan to, something “important” comes up.

I’ve been occupying myself in the downtime with reading up on any information I can find directly before the impacts. I’ve also discovered that I have full access to the base’s database. I’m not even close to ready to start digging into that. I’m trying to figure out if there is anything we missed or any sort of emergency backup plan. I had hoped for some line of communication with whoever is still out there, but so far there hasn’t been any miracle solution.

At this point I think the only thing that we can do is to start sending out long-range scouting parties and have them set up communication relays so we can expand our broadcasting range. Initially I was going to send the bots out to do it, but they’ve become invaluable here, not only with the “peacekeeping” aspect, but the rebuilding and fortification efforts. I was never a big fan of the artificial intelligence systems that coordinate the automatons. I always had a feeling that they were planning against us, but I’ve been assured that there are safeguards to prevent these sort of things.

As I sit here in my office, I can see out over what we’ve been building. It’s starting to look less like a military base and more like a small fortified city. As more people come, it keeps expanding. We’re even starting to build up just to conserve space and to increase the sightlines.

A point was made about how fast the growth has been spreading, and if there was a drop off point. Some of the egg heads got together and threw down some mathematics: They estimate that the initial growth should slow by the end of the year and then it will just slowly begin creeping over the next few decades. As the atmosphere clears up and most of the fertile land is consumed, it’s going to slow the rate of the infection. Or so I’m told. I’m not sure I plan on sitting around to find out, so I’m planning some tests.

I want to find a way to destroy it, push it back. Plasma works well, but I don’t have enough plasma to take back everything, so I need another solution. But what we need are samples. I don’t want to bring any of it back here, so the white coats have suggested we take a team to the CDC center in Louisville to see if we can get it operational and then use it as a test site. There are some logistics to work out, but if we’re doing this, I fully intend on being there personally, so chances are that my next entry will be from there, with a bit of luck.

I’m giving a copy of all of my journals to Captain Barnes, my second in command. He’s promised that one way or another they will make it to you. I believe him. He’s a good man. If this is my last entry, I love you both and I’m sorry.