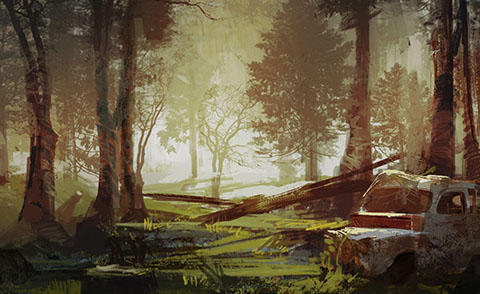 The Story So Far

I grew up hearing Gramps’ stories of the Old World, back before the Fall in 2196. After supper every night, we’d gather around and listen to tales of his childhood. He was only six when the asteroid hit, but as he puts it, “The end of the world ain’t somethin’ you just forget.”

All those years later, he could recite the daily updates on the asteroid’s approach and the government’s promises of safety with the Space Defense System. Most of all, he remembered the day it fell apart. The day death fell from the skies.

Gramps said it was like watching fireballs bloom in the sky when the asteroid broke apart. He took his family and hid in a shelter with some neighbors… there were a lot more people back then. When it was over, they came out to see the sky, blackened by ash, but they celebrated because they thought the worst was over; they had survived. It wasn’t until a little later that they began to learn out about the spores. Those were the scariest stories; strange, transformed plants growing everywhere, the air becoming toxic and killing people… or transforming them into monsters. The Ferals, we call them today. Mutant boogeymen, crazed killers and cannibals that especially loved the taste of disobedient children, according to Ma and Pa.

He told other stories too, about the fantastic world before the Fall. Pa always told me that they were made up, that I shouldn’t listen to Gramps’ tales about flying machines, huge farms run by robots, and magical medicines that could cure almost anything.

Pa had a saying: “Work your fields, stay out of the overgrowth, and keep your rifle loaded when you’re on watch at the wall. That’s all that matters.” I know now that he just wanted to keep me safe, but I still loved Gramps’ stories.

I guess that as I grew up, I held that Pa’s way of thinking was best. I mean, what did it matter what once was? What we needed to focus on was now. Gramps always said the best thing about the Fall was that it brought people together. He said that people before the Fall were self-centered and lazy. Even if Gramps’ stories weren’t made up, even if all those things really existed, they were long gone now, lost to the Ferals and the overgrowth. I trusted in that truth. Then, one day, a stranger arrived at the settlement.

Everything changed. Until that moment, I didn’t even know there were other settlements out there.

Our foragers brought him back from outside the walls. Looking back, I think he was severely infected by the spores. It was obvious something wasn’t right with his him. He was speaking nonsense. He had cuts and bruises that wouldn’t heal when treated. What I remember most, though, was his outfit and weapons. He carried some strange things. Many things made of materials no one had ever seen before and some even the elders didn’t know how to use. The objects sparked my imagination. Where did this man come from? What is really out there in the wilderness? What treasures from the Old World lay waiting for the adventurous?

When the stranger died, the elders confiscated his gear, including conspicuous devices they called data cubes. The data cubes were placed in the information center and locked up where no one could touch them. They forbid us from talking openly about them. That didn’t stop people from imagining, or whispering among themselves. We developed our own urban legends about what the cubes might contain. Some said they held maps to machines that would bring the Old World back. Some believed they held knowledge that would help us heal, thrive and travel. Others warned the cubes and strange objects are cursed and should be left alone. After all, the old ones were smarter than us, and yet even with the strange tools, they died.

And yet I can’t help but wonder why no one who has left our walls has ever come back. Did they die? Did they find others? Who and what is out there?

Just before Gramps died, he took my hand and whispered in my ear: “It is time to stop surviving. Learn how to live again!” I’m sorry Pa, I can’t ignore his words. I think this was the reason he told his stories. I’m 27 now, a man grown. My path is my own to decide.

The only question, then, is what do I really want? To eke out an existence? Or to seek out my dreams?

It is time to take my destiny in my own hands. I have too many questions that will never be answered if I stay here. Tonight I stole the objects that the elders keep hidden away. I will slip away and succeed where others have failed.