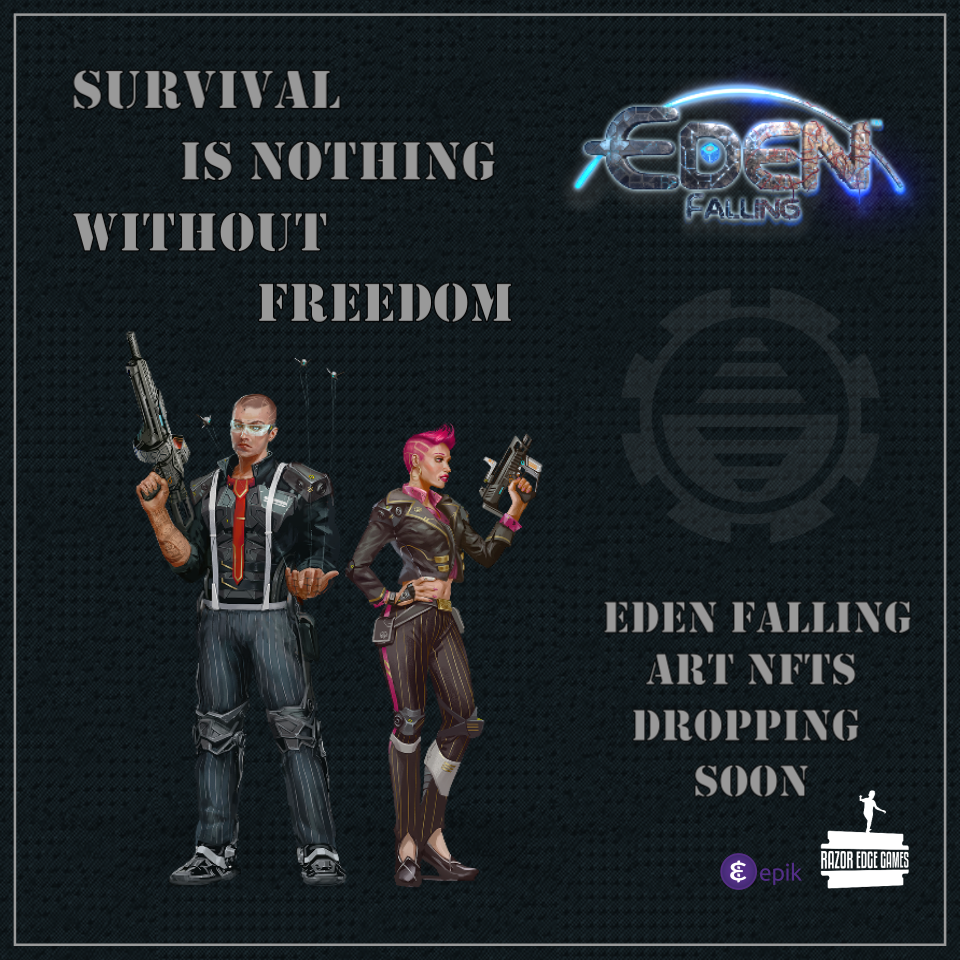 Phoenix, Arizona (May 24, 2022) - Razor Edge Games has teased big surprises in store for 2022, and today the studio is officially unveiling a partnership with Epik Prime to bring fans a collection of NFTs based on the world of Eden Falling.

For those who may be unfamiliar, Eden Falling is an innovative and pioneering gaming experience, bringing traditional turn-based tabletop role-playing game (RPG) mechanics into the digital world. Players will have near-limitless freedom to create their own adventure through The Afterfall in the wake of a catastrophic asteroid impact.

Razor Edge Games wants its mission to be understood - “We are focused on pushing the boundaries of what games can be, particularly when it comes to the intersection between video games and traditional tabletop gameplay, not just making a quick buck by leaning on well-trodden gaming conventions.”

However, blazing new trails within the industry is time-consuming and costly. As such, Razor Edge Games has always sought to secure the necessary funding to take care of its team and bring many of our team on board full-time while simultaneously delivering a finished, polished version of Eden Falling to players in a way that keeps the studio’s uncompromising creative vision intact.

This partnership with Epik Prime will open up a new revenue stream that will enable the studio to achieve both of those goals and the team is thrilled at the prospect of being able to expedite the development process on Eden Falling using the funds from this new venture.

Razor Edge Games wants to make it clear that when these NFTs are released in the near future, they will exist outside of the game and do not, in any way, represent a pay-to-win structure being introduced to Eden Falling. These art pieces are simply another way for audiences, both new and old, to engage with the lore of the game’s universe in a fresh way.

Every NFT purchased will go towards sustaining Razor Edge Games as an independent studio and owners of the NFTs may also receive exclusive cosmetic rewards inside Eden Falling when it receives a full release, including a virtual display of their NFT collection in their domicile, weapon skins, and more. In addition, there will be raffles buyers may enter for exclusive prizes, hosted by Epik Prime! Interested parties can read more about this here.

Razor Edge Games is eager to share more details about this collection of Eden Falling NFTs in the near future and the studio invites everyone to keep an eye on their (and Epik Prime’s) social media channels for more updates soon.

See you all in The Afterfall!

Join the Afterfall and choose your Destiny.

Razor Edge Games is an independent gaming studio. We are a diverse collective of more than 120 passionate artists and gamers from around the globe with diverse backgrounds and experience levels, based in Gilbert, Arizona. With a passion for tabletop gaming and traditional RPGs in its DNA, our studio is hard at work on its debut game, Eden Falling, with several more exciting projects planned for the future.