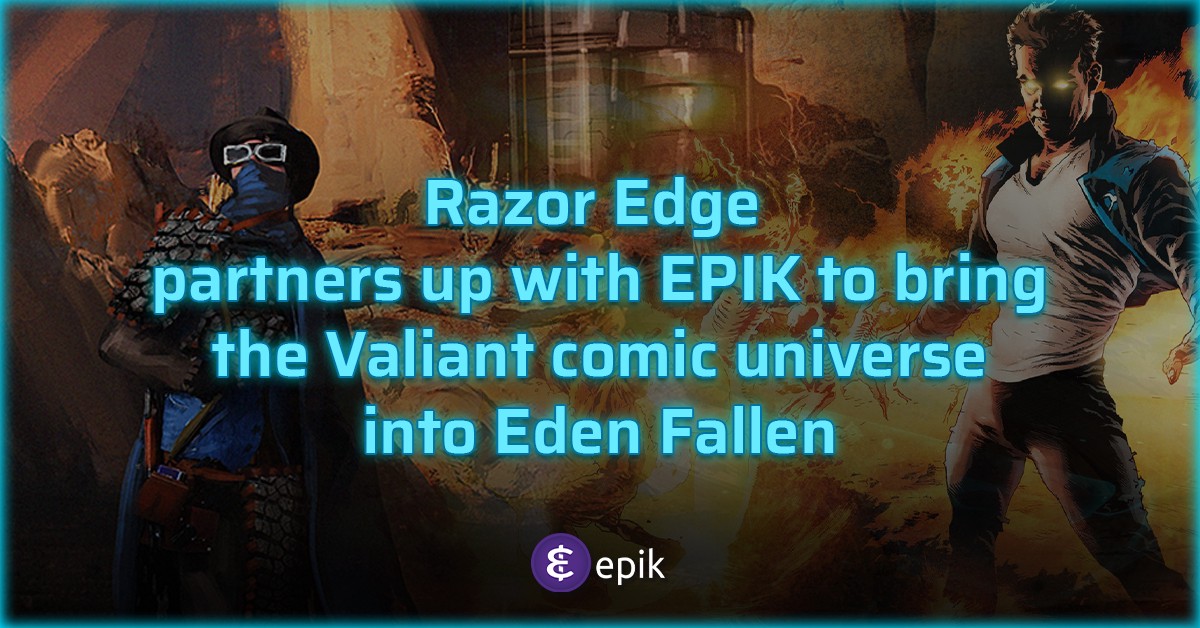 Bringing Comic Book Characters to Life in the Metaverse

Following different storylines within the Eden Falling world, fans can and will interact with Valiant’s featured comic book personalities in various scenarios. These digital heroes and villains may appear in-game NPCS and even give players Valiant-themed quests. Players may have the ability to join forces with these men and women as they bring their particular brand of justice to the world of Eden Falling.

Razor Edge Games’ design team will be working closely with Valiant to ensure that the portrayals of these characters are consistent with their original vision.

“We look forward to players immersing themselves within the world of Eden Falling and enjoying the many Valiant comic book heroes we will feature in The Afterfall,” said Razor Edge Games CEO Mike Weiser.

“The opportunity to see iconic Valiant characters and gather cool collectibles featuring them while exploring the wastelands of EDEN FALLING is such an exciting opportunity,” said Gregg Katzman, Valiant Entertainment Director of Marketing & Publicity. “The thought of bumping into X-O MANOWAR, ETERNAL WARRIOR, and other Valiant characters is truly thrilling. I do hope the in-game adventures inspire players to also explore their local comic shop to learn even more about Valiant within the pages of the comics!"

“Bringing together Razor Edge Games with Valiant Entertainment was an obvious choice,” said Epik CEO Victor David. “We live to connect brands with games and look forward to seeing this partnership thrive and evolve.”

Heroes from Valiant’s expansive catalog might also be obtained and collected as various in-game digital collectibles such as posters, costume pieces, holograms, stickers, and much more as rewards for completing contracts (quests), discovered from within the ruins taken over by the overgrowth, or looted from those who have the audacity to challenge a players’ fortitude.

The Afterfall is a world of ferals, marauders, and basic survival from day to day is a feat in itself - so these heroes who persevered, endured, and triumphed through sheer will, are ready and willing to do whatever it takes to prevail with no apologies and no excuses.

Join the AfterFall and choose your Destiny.

Razor Edge Games is an independent gaming studio. We are a diverse collective of artists and gamers from around the world, based in Gilbert, Arizona. Our mission is to create replayable, content-driven experiences fueled by innovation. REG independence means not having to adhere to flashy trends, stuffy board members, and corporate Yes-Men who rehash the same tiring games over and over. We are risk takers with the vision to take the gaming experience far beyond traditional industry norms. We aim to give the gamer full control of their own experience.

Valiant Entertainment is a leading character-based entertainment company that owns the largest independent superhero universe in comics. With more than 81 million issues sold and a library of over 2,000 characters, including X-O Manowar, Bloodshot, Harbinger, Shadowman, Archer & Armstrong, and many more. Valiant is one of the most successful publishers in the history of the comic book medium. Visit ValiantStore.com for Valiant Merchandise and more!

With more than 300 video game clients, Epik is the leading global licensing agency putting brands into video games to produce premium digital items and experiences for over one billion gamers worldwide with the largest digital ecosystem with hundreds of the world’s most popular entertainment brands. Epik is widely considered to be the blockchain industry leader producing collaborations for premium licensed digital collectables, NFTs and exclusive experiences powered by an interoperable proprietary cross-chain technology. Epik was the first and only NFT company to do any deals with AAA gaming companies for NFTs. Clients include ViacomCBS, Warner Music, Garena, Tencent and Universal Music Group.